Week 44:  Elementary School.  Describe your grammar/elementary school (or schools).  Were they big or small?  Are any of these schools still in existence today?  If so, how have they changed since you went there? 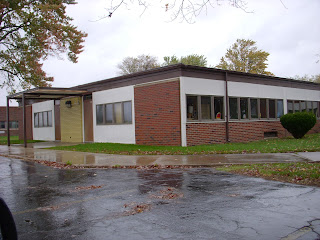 Deckerville Elementary School, Deckerville, Michigan
﻿
I entered the brown door on the right in the picture above in the fall of 1962 and started Kindergarten.  I attended this school until the end of the first semester of fifth grade in 1968.  The picture above shows the wing the Kindergarten and 1st grade classrooms were in.  It was a small school then and is still considered small.  There were two kindergarten classrooms and two 1st grade rooms in this wing.  It was detached from the rest of the school when I went there.  There was an old two story school to the right and in front of this wing.  They eventually tore it down and built more classrooms and connected it altogether.  I never had any classes in the old school, but I remember my sister had girl scouts in the cafeteria of that building.
My 2nd, 3rd and 4th grade classrooms were in a wing that is perpendicular and behind the wing above.  I remember those classrooms as all being the same.  All three of my classrooms were on the same side of the hall.  The blackboard was to the right of the door.  Desks were in rows with cubbies for our coats and boots to the side.  The back of the classroom had cupboards and a big cubby for supplies.  To the left of the desks was a wall of windows that overlooked the playground.  A door to the playground was on that wall too.﻿
For 5th grade I attended class in the new addition.  It was a nice classroom.  Again, the blackboard was to the right of the door.  Two cupboards and hooks and shelves for coats were to the left.  The back wall had a sink and drinking fountain on it.  A window was in the back corner.  Bulletin boards were across from the door.  This is also the classroom that 12 years later, the man who would become my husband was teaching in.

Today, the school is basically the same.  A few years ago they added another wing to the elementary.  It is behind and parallel to the wing in the picture above.

My family moved 25 miles north to Harbor Beach, Michigan in January of 1968.  I attended one semester of fifth grade and then sixth grade in Harbor Beach Elementary School.  The elementary school was on the south side of the building that housed all K-12 grades.  It was a little bigger than Deckerville, but still considered a small school.  The classrooms were very similar to other elementary classrooms with chalkboards, bulletin board, hooks for coats, desks and cupboards.  This school is the one that changed the most through the years.  The district eventually built a separate elementary school and the wing I had gone to in 5th and 6th grade was the science and math wing in high school.  The district also built onto the school sometime in the early 70's.  They have recently built onto the high school again.  The building is once again a K-12 school.  I haven't been in the high school since 1981, when I interviewed for a teaching job.
Posted by Brenda Leyndyke at 11:00 AM