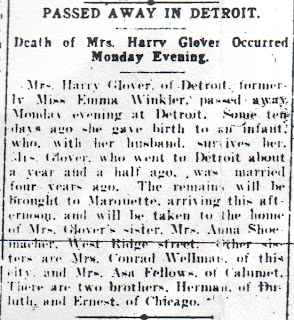 Mrs. Harry Glover of Detroit, formerly Miss Emma Winkler, passed away Monday evening at Detroit. Some ten days ago she gave birth to an infant who, with her husband, survives her. Mrs. Glover, who went to Detroit about a year and a half ago, was married four years ago. The remains will be brought to Marquette, arriving this afternoon and will be taken to the home of Mrs. Glover's sister, Mrs. Anna Shoemacher, West Ridge Street. Other sisters are Mrs. Conrad Wellman, of this city and Mrs. Asa Fellows, of Calumet. There are two brothers, Herman of Duluth and Ernest, of Chicago.