My dad told me that his mother had a difficult time when Harry died.  She always thought his given name was Frank H. Glover, Jr.  Can you imagine the trouble she went through trying to get everything in order after his death? 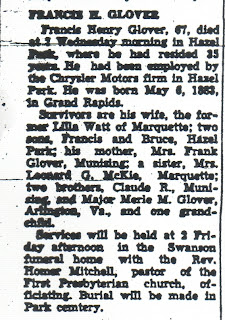 Francis Henry Glover, 67, died at 7 Wednesday morning in Hazel Park, where he had resided 35 years. He had been employed by the Chrysler Motors firm in Hazel Park. He was born May 6, 1883 in Grand Rapids.

Services will be held at 2 Friday afternoon in the Swanson funeral home with the Rev. Homer Mitchell, pastor of the First Presbyterian church, officiating. Burial will be made in Park Cemetery.

(Blog Author's Note:  Harry Glover was born in Jackson, Michigan not Grand Rapids.)
Posted by Brenda Leyndyke at 7:00 AM