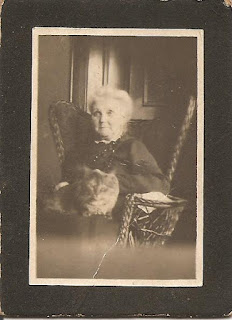 Adaline L. (Dyer) Glover
Hattie's Bible has been a great blessing to me.  The family information has been great, but what is more special to me are the pictures.  The above picture is of Hattie's mother-in-law, Adaline L. (Dyer) Glover, which I found in Hattie's Bible.
Adaline L. Dyer was born 6 March 1838, in New York City, New York, United States.  Her parents were William G. Dyer and Mary Ann Swallow.  The Dyer family can be found living in Cazenovia, Madison, New York in the 1850 U.S. Federal Census.
Adaline married Samuel Stillman Glover, Jr. on 2 August 1857 in Lenawee County, Michigan.  She was 19 years old.  Adaline and Samuel had ten children:  Charles W., William E., Frank H. (my great grandfather), Mary J., Louis B., Laura J., Sarah, Twins Emma and Emerson, and Walter.
Adaline died 19 December 1917 King, Waupaca, Wisconsin at the Wisconsin Veterans' Home.  She is buried at Wisconsin Veterans Memorial Cemetery, King, Waupaca, Wisconsin.
While I have discovered the vital records for Adaline, I would love to be able to flesh out Adaline with more facts or stories.  I know very little about Adaline or her family.  But, I think I know where I got my white hair from!
Posted by Brenda Leyndyke at 8:00 AM