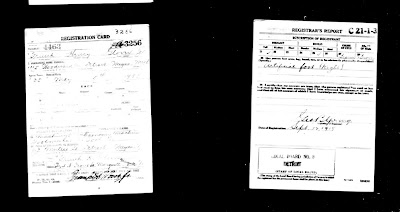 Source:  "World War I Draft Registration Cards, 1917-1918," [database on-line], Ancestry.com,
Entry for Frank Henry Glover, Jr.
This World War I draft registration card is for my grandfather, Harry Glover, but for some unknown reason he went by Frank Henry Glover, Jr. too.  His birth certificate lists Harry Glover.  Even though his name is different and for some reason his birth date too, it is his.  His birth date was 6 May 1883, not the 5 May 1883.
How do I know it is the right record?  There are a couple of facts that confirm it.  He lists his relative as Frank H. Glover, Marquette, Michigan, which is his father.  Also, it states that he has an artificial right foot.  My grandfather lost his right foot running to catch a train at the age of 18.  His occupation is listed as a toolmaker.  My grandfather was a tool engineer for many years with the Chrysler Corporation.  Although, the name and birth date are wrong, the card is indeed my grandfather's Harry Glover aka Frank Henry Glover, Jr.﻿
﻿
﻿
Posted by Brenda Leyndyke at 8:00 AM