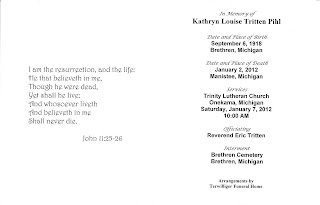 This funeral card is for my aunt and godmother, Kathryn Louise (Fredrick) Tritten Puryear Pihl.  Aunt Kate as we called her was the oldest daughter of Otto August Fredrick and Daisy Ellen (Graf) Fredrick.  She was married three times.  First, to Carl Tritten.  Next, to Russell Puryear. Last, to Weiko Pihl.  They all preceded her in death.

Aunt Kate's grandson, Rev. Eric Tritten officiated at the funeral.  He gave a wonderful sermon that celebrated the life of his grandmother.  I even learned a few genealogical facts, as he shared where she was baptised and confirmed.  She was baptised at the Church of the Brethren in Brethren, Michigan and confirmed at Trinity Lutheran Church, Onekema, Michigan.

Rest in Peace, Aunt Kate.
Posted by Brenda Leyndyke at 8:00 AM