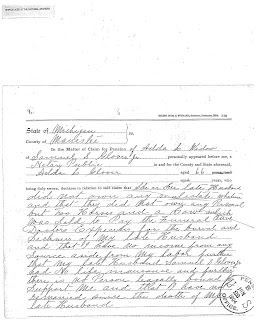 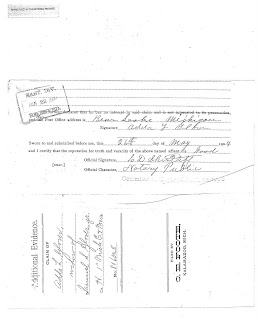 State of Michigan
County of Manistee
In the Matter Of Claim for Pension of Adda L. Widow of Samuel S. Glover Jr. personally appeared before me, a Notary Public in and for the County and State aforesaid,
Adda L. Glover aged 66 years, and who being duly sworn, declares in relation to said claim that She or her late Husband did not own any real estate whatever and that they did not own any Personal but Two Horses and a Cow which was Sold to Pay the Funeral and Doctors Expenses for the burial and Sickness of my late Husband and that I have no income from any Source aside from my labor further that my late Husband Samuel S. Glover Jr had No life insurance and further there is no Person leagally bound to Support me and that I have not remarried since the death of my late Husband  He further declares that he has no interest in said claim and is not interested in its prosecution and her Post Office address is Bear Leake Michigan
Signature Adda L. Glover
Sworn to and subscribed before me, this 26th day of May  1904 and I certify that the reputation for truth and veracity of the above name affiant is Good
Official Signature, L.D. Shir?liff
Official Character, Notary Public

My second great grandfather, Samuel Stillman Glover, Jr. died 12 April 1914.  Just six weeks later, his widow, Adaline 'Adda'  L. (Dyer) Glover filed the above affidavit attesting that she did not own real estate or personal property.  She states that she had to sell two horses and a cow to pay for the funeral, burial, and doctor's expenses of her husband.  She had no income and no one responsible for her.  She goes on to state that her husband did not have life insurance.  She states she has not remarried.

Adda was 66 years old and the reason for filing these affidavits was so she could receive a widow's pension from her husband's civil war service.  What did she get for her widow's pension? $8 per month, or $96 a year.  Can you imagine living on $96 a year?  The average American worker made between $200 and $400 a year in 1904.

Adda lived for another 13 1/2 years.  She lived with her daughter, Sadie (Sarah), for a time in Wisconsin and with her son, Louis, in Grand Rapids, Michigan.  She spent the last part of her life in the Wisconsin Veteran's Home, dying there on 19 Dec 1917.

She continued receiving monthly widow's benefits up to her death in the amount of :


Thankfully, Adda had a widow's pension and survived by living with her children, but what a hard few years she had bouncing from home to home.
Posted by Brenda Leyndyke at 8:00 AM