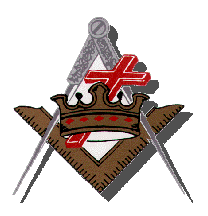 The Daily Tribune of Royal Oak, Michigan published Harry Glover's obituary on the 6 September 1950.  Harry's obituary stated that he was a member of University Lodge 482, F and AM(Free and Accepted Masons), Detroit, Michigan.  I decided to research this a little further.

First, I went through my pictures of my grandfather, Harry, to see if he had a ring or any other identifying symbol of his mason membership.  I did not find anything. Detroit Masonic Lodge
Next, I researched the University Lodge 482 and found out that they held their meetings at the Detroit Masonic Temple, 500 Temple Ave., Detroit, Michigan.  Temple Avenue was originally named Bagg Street.  The Detroit Masonic Temple is a wonderful example of Gothic Revival architecture.  It has 12 million cubic feet of space, is 14 stories high and has 1037 rooms.  It has theaters, ballrooms, cathedrals, chapels, and more.  It is on the National Registry of Historic Places and is across from Cass Park, in Detroit.  Interior pictures can be found here.

My grandparent's lived on 484 Cass Avenue (which is 3000 Cass Avenue, today).  It is between Charlotte and Temple Streets.  They use to tell of going to Cass Park to sleep on hot, summer nights.  They figured that wasn't a good place to raise a family and moved to Royal Oak, Michigan around the time my father was born.  I imagine my grandfather taking a short walk to his meetings.  He would have been able to see the lodge from his house. 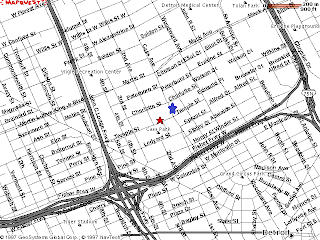 Red Star depicts where the Masonic Lodge is-it is between Cass Avenue and 2nd Avenue on Temple Street.  Cass Park is across from it.  Blue Star shows where my grandparents lived on Cass Avenue between Charlotte and Temple Streets.
I am not finished with my grandfather's mason membership.  I plan to do further research by contacting the Grand Lodge of Michigan to see what type of archives and genealogical information they have.  Do you have ancestors who were Masons?  What type of information were you able to find?

(Detroit, Michigan renumbering system began on 1 January 1921.  The 1920/21 Polk City Directory shows both the old number and the new number.  Steve Morse has a transcription of the old and new numbers as they appeared in the directory.  Burton Historical Library has Detroit City Directories in their collection.)﻿
Posted by Brenda Leyndyke at 8:05 AM