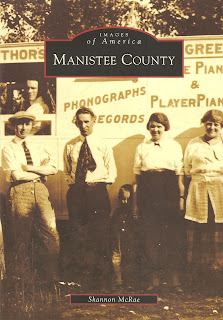 Last month, I wrote about my excitement in finding my grandmother pictured in the Marquette Images of America book.  Would I be so lucky in the Manistee County one?

My Manistee County  ancestry goes back to the early days of Manistee, Michigan.  My Great Grandfather, Johann August Fredrick, immigrated to Manistee in the early 1870's.  His work centered around the logging and sawmill industry.  The first chapter of this book has pictures of that work.  Is my great grandfather in it?  Not that I know.  I only have pictures of him as an older man, so I wouldn't recognize him if he was. 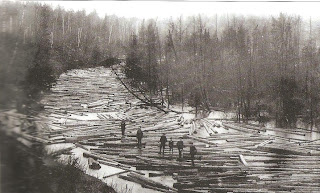 Logging on the Manistee River

In addition to the Fredrick family, I have Graf family who came around 1900 to Brethren, Michigan.  An unconfirmed family story is that Valentine Graf brought his family by wagon train, from Indiana, with a group of German Baptist Brethren members to settle in Brethren.  This is something I would like to explore further.  One of the pictures in the book is of members of this church before 1901.  Is Valentine Graf in this picture?  Again I don't know. 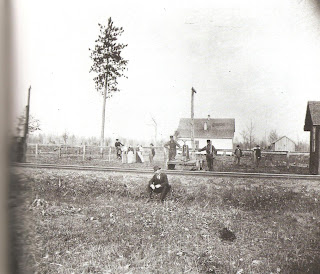 ﻿
Early picture of Brethren Michigan, which was almost named Lone Pine for the single pine visible in this picture.

﻿
﻿Brethren Historical Association maintains a little museum that I have visited.  I need to visit again.  I would like to learn more about the early days of Brethren and the role the German Baptist Brethren played.

The Manistee County Images of America book has given me new avenues to explore.  Their pictures are a wonderful, historical representation of the early days of Manistee County.  A time when my mother's grandparents settled there.  I have so much more to explore now thanks to this book.
Posted by Brenda Leyndyke at 8:05 AM