Adda L. Glover was a Member of The Temperance Union

How many times as genealogists do we find surprising things about our ancestors while researching?  I found one such surprise in the Muskegon Chronicle, Muskegon, Michigan newspapers.  My 2x great grandmother, Adda L. (Dyer) Glover, aka Mrs. S. S. Glover, was a member of the Women's Christian Temperance Union (W.C.T.U) in Muskegon, Michigan.

According to the W.C.T.U. website it was "organized by women who were concerned about the destructive power of alcohol and the problems it was causing their families and society."  Members chose to abstain from drinking all alcohol.  The W.C.T.U. was founded in 1873 and organized nationally in 1874.  They met in churches for prayer and marched to local saloons to ask the owners to close their establishment.

The first mention I found of Adda's membership was on page 3; column 2 of the April 11, 1881 edition of the Muskegon Chronicle.  It stated, "Mrs. S.S. Glover and Rev. M.W. Fairfield will address the temperance meeting at the opera house, Sunday, April 17th. 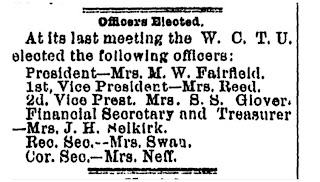 Another article from the August 24 1882 Muskegon Chronicle, found on page 2; column 3 in the Personal Pointers section, states that, "Mrs. S.S. Glover, Mrs. J.H. Selkirk, and Mrs. Eldred, left this morning to attend the W.C.T.U. convention at Whitehall."

These articles show that my second great grandmother, Adda L. Dyer Glover was an active member of the Temperance Union.  Were these the only articles I found?  No!  I found one about a July 4th incident.  I will be sharing more in future posts.
Posted by Brenda Leyndyke at 8:05 AM