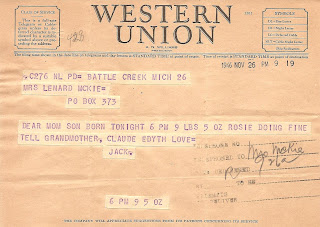 The above telegraph was sent to Mrs. Leonard McKie announcing the birth of a son.  It was found in Hattie Fenn's Bible.  The following tells who is mentioned in the telegraph:

Jack-John 'Jack' Glover Tyson﻿
Posted by Brenda Leyndyke at 8:03 AM