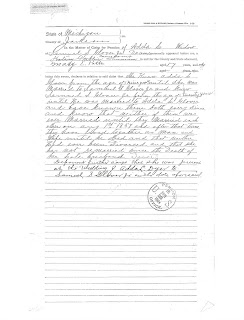 State of Michigan
County of Jackson

In the Matter of Claim for Pension of Adda L Widow
of Samuel S. Glover Jr Deceased personally appeared before me, a
Notary Public circuit court commissioner in and for the County and State aforesaid,
Mary E. Potts aged 57 years, and who
being duly sworn, declares in relation to said claim that She Knew Adda L
Glover from the age of x nine years until She was
married to Samuel S Glover Jr from the age of  x twenty years
until He was married to Adda L Glover
and have known them both every Since
and know that neither of them was
ever married until they married each
other on Aug 1st 1857 and after that time they have lived together as man and
Wife until he died and that neither
Had ever been Divorced and that she
has not remarried since the Death of
her Late husband.  Death x
Deponent further says that she was present
at the wedding of Adda L. Dyer to
Samuel S Glover Jr on the date aforesaid.

The above affidavit was found on page 15 of my 2x great grandfather, Samuel Stillman Glover, Jr. civil was pension file.  The person providing the information, Mary E. Potts, is the sister to Adda L. Glover.  Their maiden name was Dyer.  Mary was nine years younger than her sister.

Samuel's pension file provided other documentation about their marriage.  This wasn't the first I knew their marriage date, but it provides additional documentation for it.  It tells that Mary knew Samuel from when he was twenty.  Samuel was twenty-one when he and Adda married.  In addition, I learned that Mary was at their wedding.

Samuel's pension file has been a wealth of information.  In addition to his service records, it has provided me with personal family information.  Information I have not been able to find elsewhere, yet.
Posted by Brenda Leyndyke at 10:55 AM