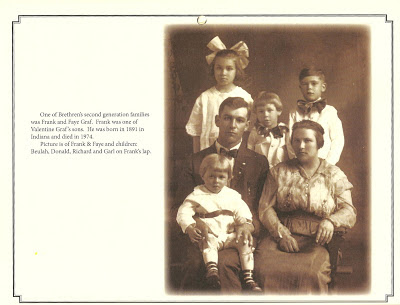 The Frank and Faye Graf Family
Picture from Brethren Heritage Association calendar for 2012-2013
"One of Brethren's second generation families was Frank and Faye Graf.  Frank was one of Valentine Graf's sons.  He was born in 1891 and died in 1974.
Picture is of Frank and Faye and children:  Beulah, Donald, Richard and Garl on Frank's lap."

103 years ago today (21 October 1909), Ernest Franklin 'Frank' Graf and Faye Inez Keck were married in Brethren, Manistee, Michigan.  Frank was born 13 August 1891 in Indiana to Valentine Graf and Nancy (Mast) Graf.  Frank moved to Brethren as a young boy with his family.  Faye was born 2 June 1894 in Kalamazoo, Kalamazoo, Michigan to Jacob and Martha (Winger) Keck.

Frank and Faye both died in 1974 in Pontiac, Oakland, Michigan.
﻿
Posted by Brenda Leyndyke at 8:05 AM