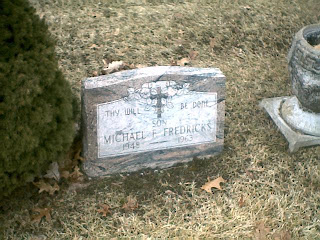 THY WILL BE DONE
SON
MICHAEL F. FREDRICKS
1948            1963
This week is the anniversary of the death of my cousin, Michael Fay Fredricks.  Michael was just 15 years old when he died in a tragic accident.
Mike was the son of Otto Robert and Fay Fredricks.  He was born 27 March 1948 in Manistee, Michigan and died on 25 October 1963.  He is buried next to his parents in Brethren Cemetery, Brethren, Michigan.﻿
﻿
Posted by Brenda Leyndyke at 8:05 AM