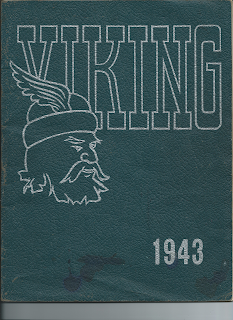 I was helping my parents clean their house this summer, when I decided to take the books off of the wall unit to dust.  Imagine my surprise when I found my dad's high school yearbook.  I knew he was an athlete and the sport's editor of his high school newspaper, but I didn't know everything else he participated in.  I borrowed the yearbook and have been scanning the pages. 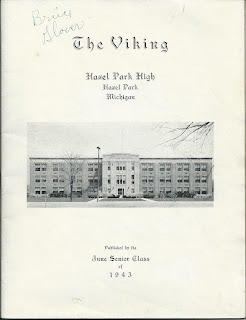 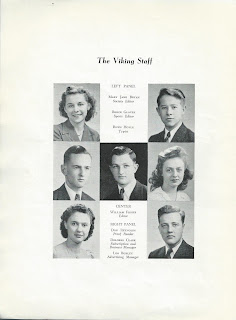 My father, Bruce Glover, was the Sports Editor for "The Viking", the school yearbook.  He is in the second row, first one on the left.  My dad always said if he hadn't gone into teaching he would have pursued a career in sports journalism. 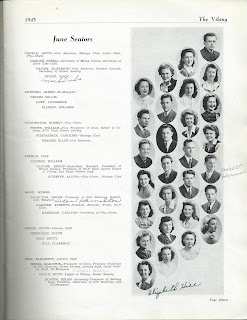 Hazel Park High School in Hazel Park, Oakland County, Michigan had a January and a June graduating class.  My dad was in the June class.  He can be found on page fifteen, fourth row, three from left.  Activities he participated in were Basketball, Baseball, President of Honor Society, President of Hi-Y Club, Sports Editor of Viking, and Hazel Parker Staff.

Anything related to sports would not have surprised me, but President of National Honor Society and President of Hi-Y Club did.  I guess I just figured he was so absorbed with sports most of his life that he wouldn't be president of a club, let alone two.  Who knew? 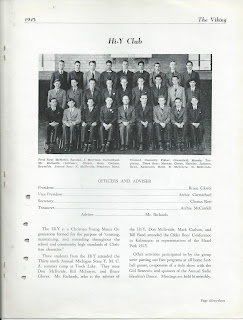 I had never heard of the Hi-Y Club before and for those of you who grew up in the 60's and 70's it isn't that!  The Hi-Y Club is a Christian Young Men's Organization.  The club's purpose was for "creating, maintaining, and extending throughout the school and community high standards of Christian character." I don't know why this surprised me because my father has always been a great role model.  Whether as a father, teacher, or coach he modeled high standards of character.

The Hi-Y page of the yearbook also told me that three students, Don McIlvride, Bill McIntyre and Bruce Glover attended the Michigan Y.M.C.A. summer camp at Torch Lake. I can imagine the fun these three had as they were all friends. 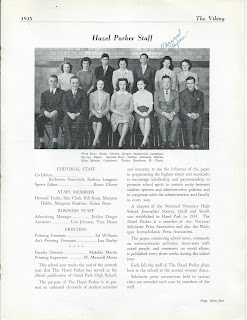 The Hazel Parker was the school newspaper, it chronicled the activities of the students.  My dad served as the Sports Editor and this came as no surprise to me.  I have heard my dad talk about being a sports editor.  Also, during this time he worked for the Hazel Park Palladium, the local Hazel Park weekly newspaper.  What did he do?  You guessed it, sports editor.
I will share my dad's sports participation in a future post, but I have one last surprising thing to share.  The June Class Will was included in the yearbook and here is what it says:  "Shirley Hyde and Bruce  Glover will their inconspicuous romance to Donna Martin and Lawrence Longman, who are taking theirs to heart."  Sounds like Dad had a crush.  Here is what Dad says about Shirley.

The one girl that I always had eyes for from 8th grade on was Shirley Hyde and  I would talk to her when occasion presented itself but never actually dated until my junior year when I got up enough courage to ask her to a movie.  I dated her on and off and by end of my senior year we were dating steadily.  I didn’t know how to dance and wasn’t particularly interested in learning but did take her to the prom in our junior and senior years.  I guess I got out on the floor and stumbled around a little and imagine she was completely bored with the whole thing.  When I was in the service I corresponded with her regularly while in training and I guess you could say I was in love or thought I was.  After going overseas the letters stopped coming  and stopped altogether and when I got home I found out she was going steady and I never saw her again.

Do you have an ancestor's yearbook?  What surprises did you discover?