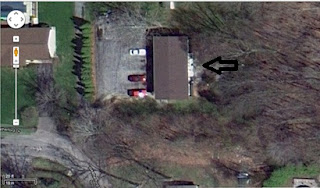 
I had done it!  I successfully completed my semester of student teaching and I was so close to graduation I couldn't believe it.  I just had to finish six more credit hours at Western Michigan University in Kalamazoo, Michigan.  I needed to decide where I was going to live while completing my coursework.  I was contemplating a move back to Kalamazoo when the guy I was dating suggested moving to his hometown,  Coloma, Michigan, which is 40 miles from Kalamazoo.  I checked into the course schedule and realized I could take my classes on Tuesday and Thursday.  So, I decided to commute and found myself living in Coloma in 1979.

Coloma is a small city in the area known as the Fruit Belt of Michigan.  Orchards of cherries, apples, peaches and more can be found in the fertile farmlands of southwest Michigan.  Summertime brings activities at Paw Paw Lake.  My boyfriend owned a boat and we would go out on the lake, he would water ski and I would soak up the sun while someone else drove.  Winter is a time for snowmobiling, which I did and actually enjoyed riding with others on trails to a number of small towns in the area.

I rented an apartment on Wetherford Terrace in Coloma.  It was a one bedroom, one bath, living room, kitchen and dining area place.  I lived on the ground level with sliding doors to a small patio that overlooked a wooded area.  It was the first place I could call my own.  I felt so grown up.  My boyfriend still lived with his parents (that should have been a clue of what was to come) which was outside of Coloma.

I decided to substitute teach until school was out for the summer and was able to get quite a few jobs in the nearby town of Watervliet.  I loved teaching at Watervliet. I substitute taught in the Junior and Senior High School.  The students were wonderful and the staff made me feel welcome.  On one of the first days I taught I ran into a teacher from my high school, Miss Pizer.

It sounds like it was a marvelous experience and for the most part it was.  I commuted to Western to finish my degree and worked as a substitute teacher.  It was during this time that I started having leg cramps, I contributed it to the tennis class I was taking.  Then I got sick and I couldn't shake it.  Looking back on it I believe this was the start of my thyroid problems, but the doctor couldn't find anything wrong with me.   I trudged on and eventually graduated from Western in August of 1979.

I spent the summer applying for a full time teaching job and working a part time job at a local diner.  September came without a job offer so I went back to substitute teaching.  I had a couple of long term sub positions and was able to pay my bills.  My health was better, but not great.  I was gaining weight and couldn't figure out why.

September also brought a marriage proposal.  I thought I was in love and immediately said yes.  We set a wedding date for October of the following year.  I started making wedding plans.  It wasn't until December of 1979 that things started falling apart.  I went home for Christmas and my boyfriend wasn't happy that I didn't spend Christmas with his family.  I came back to Coloma after Christmas and brought my younger brother and sister back with me.  My boyfriend and I had made plans to take them snowmobiling and spend lots of time having fun with them.  I get back to my apartment and my boyfriend stops by and asks if he can talk to me in the bedroom.  He broke up with me right then.  I was devastated, but also ticked off that he did it in front of my sister and brother.  Needless to say it was a crappy getaway for them.  I drove my sister and brother home and made plans to return to Coloma and substitute teach until I found a full time teaching position.

My dad would call and try to convince me to move home and substitute teach.  He said I could live at home rent free and wouldn't have the expenses I had living in Coloma.  I didn't want to move home, I thought that would make me a failure. Eventually, his persuasion won me over and I moved back home.  It was the best decision I ever made for a couple of reasons.

One, the first day I substitute taught I met a fifth grade teacher that I would eventually date, fall in love with, marry and have children with, Kirk.  And two, I found a doctor who diagnosed me with thyroid cancer.  Moving home allowed me to stay on my parents' medical insurance, thankfully.

I learned a lot while living in Coloma and the experiences I had there shaped me as a person.  But, the move from there brought me more joy than I ever thought imaginable.

Posted by Brenda Leyndyke at 8:08 AM