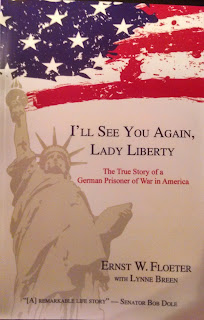 One of the best things about blogging is the contacts you make through your blog. The posts I have received the most emails about are the ones I wrote about the German POW's buried in Fort Custer National Cemetery in Augusta, Michigan.  I have been contacted by researchers; family members of those buried, who are living in Germany now; and historians.  I enjoy this aspect of blogging very much.  I have learned things from these contacts that I wouldn't have found out through my usual methods of research.  I was pleasantly surprised when I opened my 'snail' mail one day and found a flyer about a new book that was being published.  A sticky note was attached that said "I think you might enjoy this".  It was from the author, Lynne Breen and the book was titled, "I'll See You Again, Lady Liberty".  Lynne had included her email and I emailed her thanking her for thinking of me. Next, I asked if she or Mr. Floeter did any public speaking.  At the time I was in charge of programs for my local genealogical society and I thought this would be an excellent topic to offer our members. Lynne said she would forward my email to Mr. Floeter and later that day I heard from him and we set a date for him to speak.  I was so interested in his book that I ordered a copy to read for myself and I am glad I did. It is historical, autobiographical, funny, and well written.

I'll See You Again, Lady Liberty: The True Story of a German Prisoner of War in America is written by Lynne Breen, but told by Ernst W. Floeter.  The 107 page book is filled with stories of Mr. Floeter's life in Nazi Germany during the war, his time as a prisoner of war in the United States, and his decision to return to the United States after the war to make it his home.

Ernst grew up in Stettin, Pomerania and details his life as a young boy in Hitler's Germany.  He tells of his and his family's anti-nazi feelings during this time, including his mother making prank calls to the Nazi's. The book is told as if he was in the room talking to you.  It is filled with warm stories of the love of his family during the turbulent historical times. He tells of living a normal life during very difficult times.

His time in the German Youth and eventually, the German army offers an interesting perspective of the preparation for war that Germany made.  Ernst, at one time, hoped he would be captured.  He got his wish and details his time spent as a Prisoner of War.  He was transported to the United States and spent time at camps in Michigan (Camp Custer), Illinois, and New Mexico.  He tells of camp life, his love of candy bars, and his treatment by his guards.  The way he tells of his travels lets the reader see what he was seeing on his travels from Germany, to England, and to the United States.

Ernst returns to Germany after sailing out of the New York Harbor promising Lady Liberty he would return, which he did.  The last few chapters complete the story of Ernst Floeter, his marriage, family and the time he has spent living in Grand Ledge, Michigan, just north of Battle Creek.

I'll See You Again, Lady Liberty is a well written book filled with interesting stories and great photography.  It gives the reader a better understanding of war time in Germany and what it was like to be a prisoner of war on this side of the Atlantic.  It allows the reader to see America through the eyes of a foreign born person. Mr. Floeter's love for his new country is a joy to read.

If you would like to hear Mr. Floeter speak of his time as a prisoner of war, join the Calhoun County Genealogical Society on Tuedsay, February 24, 2015 at 7:00 p.m. in Marshall, Michigan at the LDS Church.
Posted by Brenda Leyndyke at 8:05 AM