I was told repeatedly that my great grandfather, Johann August Fredrich, came from Posen, Germany. No family members had any records or documents supporting this, only hearsay. I thought, "okay, that is a start", until I started researching Posen! Posen was not only a city, but a province, as well, and a pretty big one!

It wasn't until I was contacted by a Fredrich researcher, who lives in Germany, that I learned of the area the Fredrich family was from in the late 1700's.  He even sent me a book on the area, "Heimat an Netze Brahe Weichsel". 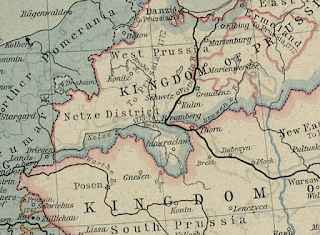 Netze District, 1786
This image is a copy or a derivative work of central_europe_1786.jpg, from the map collection of the Perry-Castañeda Library (PCL) of the University of Texas at Austin.

The Netze District was a part of the Kingdom of Prussia from 1792-1807.  Wikipedia states," It included the area of Bydgoszcz (Bromberg), Inowrocław (Inowraclaw), Piła (Schneidemühl) and Wałcz (Deutsch Krone) and was given its name for the Noteć River (German: Netze) that traversed it." The Fredrich family was from the Bromberg area.

This area eventually became a part of West Prussia, then South Prussia, which became part of the Duchy of Warsaw after Napoleon Bonaparte's victory in the War of the Fourth Coalition.  In 1815, it was divided between the Duchy of Posen and Poland. Today, the area is in Poland.