The maiden names of our female ancestors are often elusive, especially the further back in time one researches. It would be great if we could find a marriage record for every couple in our family, but that isn't always the case.  If a marriage record isn't available then one has to use other records to help find a maiden name.  Some of the records include census, probate, newspaper, and church records. 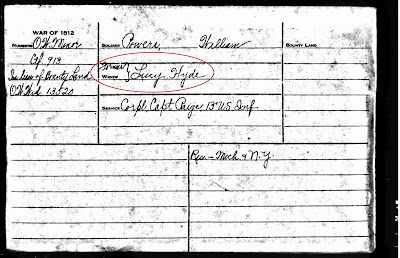 My elusive maiden name was for my fourth great grandmother, Lucy Powers Hyde.  I first found Lucy's name in the War of 1812 Pension Application Files Index for William Powers.  She was listed as William's widow, former Lucy Hyde.  I was wondering if former meant this was her maiden name, or had Lucy remarried after William's death.

Further research of Lucy Hyde led to the following records:
Since Lucy was going by Hyde as early as 1834, I concluded that Lucy Powers remarried a male Hyde between Williams death in 1813 and her mention in church session records in 1834.  Again, no marriage record has been found.

I continued my research of Lucy by researching William Powers death.  I found William's probate records in Abstracts of Wills, Adminstrators and Guardianships in NY State, 1787-1835 at American Ancestors.org.  The abstract provided the information I needed to find the actual records, dated 2 May 1817, available at American Ancestors. These records included making Lucy the administrator of William's will and naming Lucy Powers guardian for her children: Eliza Ann, Mary Ann, Remus Vernum, William, Samuel S, Vinera Egleston and Mary Ann Powers. (Note: Mary Ann was listed twice in the abstract and in the actual court transcript)

Another record showed that Asa Pixley was appointed guardian for Remus Vernum Powers of Framington, Ontario, New York, dated 18 March 1820.  This was the first time I saw the Pixley surname.  Who was Asa Pixley?  Was he family?  Was he in Lucy's family?

Each record I found led to more questions on my part.  None of the records answered my research question by itself: What is the maiden name of Lucy, the mother of Vinera Egleston Powers and wife of William Powers?

I do not feel that my research is complete, especially when primary sources are scarce, unless I conduct a broad search.  At this point, I don't feel I have conducted a broad enough search. Everything I have found is one piece of a very large puzzle, but a few more pieces are needed to come to the conclusion that Pixley is her maiden name.

Further research found a Lucinda Pixley birth record in Vermont Births, Marriages and Deaths to 2008 at American Ancestors.  It gave a birth date of 9 August 1783, in Westminster, Windham, Vermont.  Parents were Paul Pixley and Sylvia.  The birth year of 1783 coincides with census records that gives Lucy's age.

Am I ready to write a conclusion of my research question: What is the maiden name of Lucy, the mother of Vinera Powers and wife of William Powers?  Does the preponderance of the evidence lead to Pixley as Lucy's married name?  Not yet, but I feel I am getting closer.

What are my next steps?
What would you do next?  Please leave a comment if you have any suggestions of where to look for Lucy's maiden name.