Sisters, Sisters There Was Never Such Devoted Sisters 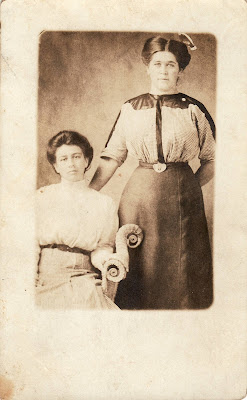 Family pictures are some of the most precious mementos I have of my family.  The picture above has to be in the Top Ten of pictures I treasure.  I received this picture from my cousin, Jamie Welch, last year.  Who wouldn't treasure this picture? Look at her tiny waist and awesome hair.

This treasured picture is of my grandmother, Daisy Ellen Graf and her sister, Mary Ann.  They were the daughters of Valentine Graf and Nancy Mast Graf.  Daisy, was two years older than her sister, Mary Ann.  Daisy was born in 1892 and Mary Ann in 1894, both were born in Howard county, Indiana. I don't know a lot about this picture, such as date taken or where, but I think it was taken in Manistee county, Michigan. I don't have a picture of my Grandma where she is younger than this. Most of the pictures I have of her are after she was married and had children.

The Graf family moved from Howard county, Indiana to Brethren, Michigan in the early 1900's. Daisy and Mary were young children when the family moved.  I imagine this picture was taken in Manistee county between the time the family moved to Brethren and 1913, when Daisy had her first child.

Aunt Mary is one of my grandma's sisters that I remember.  She lived across the street from my grandma, in Brethren, Michigan, and I think they remained close throughout their lives.