The Gift of an Autobiography

One of the best gifts my dad, Bruce Glover, gave me was a copy of his autobiography, Life As I've Known It.
My father was a humble man who didn't speak about his accomplishments much. In fact, after his death one of his student's told me, "I didn't know your dad was in the Battle of the Bulge" My dad taught history and didn't share his military story. That is who my dad was.
The senior living place where my parents lived, Story Point-Portage, has a wall of veterans. My dad is included. He never felt he deserved any veteran recognition because he didn't 'do' anything in the war. I told him numerous times, you did! Anyone who was hunkered down on the front-line in the Ardennes forest during World War II deserves recognition.
My dad died in 2018 and I plan to share some of his story with my readers. I hope you enjoy getting to know this wonderful man, who I am proud to say was my father.
Below, in his own words, my dad talks about elementary school. 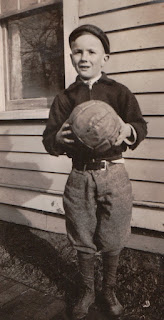 "I do not have many recollections of my early childhood prior to Kindergarten. I guess I was a highly active, little, tot and judging by pictures from that era my favorite outfit was knickers and must have had an early affliction for sports as I was usually holding a ball of some kind in my hands.  I entered Kindergarten, in fall of 1930, and only remember that when rest of kids at recess were playing tag or in the sandbox, I was out watching the older kids play softball, chasing their foul balls, and hoping they might ask me to play, which they never did. Where I acquired my love of sports, I do not know. My dad, who had an artificial leg because of chasing to catch a train, fell under the wheel, and his leg was severed just below the knee at 18 years of age. 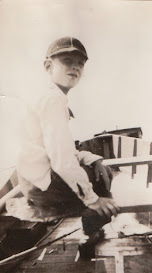 Dad was not a sportsman at all except for fishing which he enjoyed doing on our vacations in the UP.  He could sit out in a rowboat all day smoking cigars and fishing. As a 4–5-year-old, nothing was more boring to me, and I guess that’s why I never enjoyed fishing. Mom played basketball in high school, so I guess that’s the genes I inherited for sports. She attended most of my home games in Junior High and High School, while Dad never saw me play. Whether it was his leg or just using it as an excuse I don’t know, but Dad would drive us anywhere but never participate himself. My brother’s only sporting interest was golf, which I previously mentioned..."

In these two paragraphs I learned a lot.

This is just a small portion of my dad's autobiography, Check back for more stories from my dad.