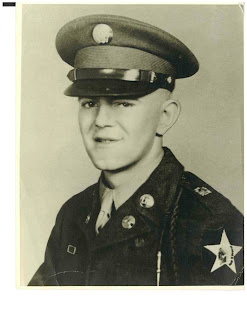 John Leonard Fredricks, age 90, husband, father, grandpa, great grandpa, and friend, of Blanchard, Michigan passed away on October 13, 2019 at McLaren Central Michigan, Mount Pleasant. A funeral service will be held Friday, October 18 at St. Paul's Lutheran Church in Remus, Michigan at 2:00 pm with Pastor Jonathan Voss officiating. Burial will follow at Decker Cemetery, Blanchard. Visitation will be held at the church Thursday from 4:00 pm to 8:00 pm and on Friday from 1:00 pm to time of service.

John was born January 10, 1929 the son of Otto and Daisy (Graf) Fredricks. John was the eighth of twelve children and was raised on a farm in Brethren, Michigan. A member of Heavy Mortar Company, 9th Infantry Regiment, 2nd Infantry Division. John served as a Sergeant in the Korean War from 1949 to 1952, where he earned the Silver Star for gallantry in action. Upon his return, he married the love of his life, Louise Guenthardt on April 7, 1956 at The Trinity Luther Church of Onekama, and the two grew their family to include six children.

John began his career as a hardworking electrical journeyman lineman around the state and eventually landed in Blanchard working for TriCounty Electric Company as a strong leader for 34 years.

John was a faithful fan of the Detroit Tigers, Detroit Lions, and University of Michigan Wolverines, where he was honored as Veteran of the Game in 2017.

John enjoyed spending time outdoors and was a passionate hunter and fisherman. He enjoyed many hours in the blind, boat, or on the ice with his brothers, children, grandchildren, nieces, and nephews. John's other pastimes included gardening, particularly picking that first ripe tomato, tractor pulling, and bowling until the age of 88. John enjoyed life and was always ready for the next adventure.

As an active member of the American Legion Guy Stanton Post 240 in Blanchard, John marched in the Memorial Day parade through the age of 89. John was honored by his community as a member of the Mid-Michigan Honor Flight to Washington, DC in 2017. His patriotism has been a consistent model for his six children and their families. He was dearly loved by his community.

John's faith played a significant role in his life. He was an active member of St Paul's Lutheran Church in Remus where he served over the years in many roles.

In lieu of flowers, donations may be made to the American Legion Post 240 or St. Paul's Lutheran Church. Envelopes will be available at the church.