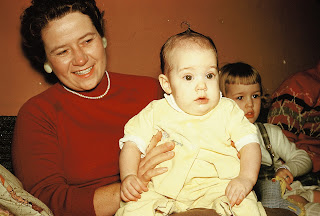 Aunt Mabel, Moi, and my sister, Linda, 1958
My aunt, Mabel Louise Ruff Glover, would have been 101 years old today. Aunt Mabel was one of my favorite aunts. She was married to my dad's half-brother, Frances’s "Hank" Glover.
I have a lot of fond memories of my Aunt Mabel. We would visit Aunt Mabel and Uncle Hank when they lived in Ferndale, Michigan and later Troy, Michigan. My uncle worked for General Motors, and they lived in South Africa and Brazil for a while. 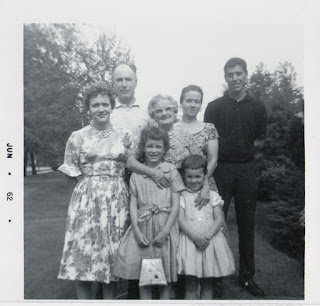 The picture to the left was taken on Easter, 1962, at Uncle Hank's and Aunt Mabel's home in Ferndale. Uncle Hank, Aunt Mabel, and their son, Stu, are behind my mom, and Grandma Bell. My sister Linda and my self are in front. I'm the short one.

We would only see Uncle Hank and Aunt Mabel once or twice a year, but I remember their homes in Ferndale and Troy. I remember their big shepherd, Shep, who was fierce when we pulled in the driveway and as tender as could be once he knew we were friends not foe.

Through the years when they lived out of the country, we would only see them when they came back to the United States. It was always an exciting time going to see them or when they would come to see us.

My Aunt Mabel was a kind, generous woman. She was a great host and a great cook. I have many of her recipes. Once at a stopover in London on the way to South Africa she bought china. She needed it for when General Motors executives visited South Africa. She would have dinner parties for them. After my aunt's death, Uncle Hank gave the china to my mom. My mom gave it to me when she downsized and moved to a senior living facility. I think she did that because I was supposed to get my Grandma Bell's china after she died, but Grandma's second husband was too stingy to ship it.