WWII Family Soldiers in the News

Living in Battle Creek, Michigan afforded me the opportunity to search the Battle Creek Enquirer for historical news. I found many articles about my first cousins, once removed who grew up in Battle Creek.

Jack and James Tyson, sons of my grand aunt, Adeline Glover Tyson McKie, were soldiers during World War II. Many articles were printed about them during the war.

The Battle Creek Enquirer had a regular column, News of Our Men in the Service. One of the articles was about Jack Tyson. It told that he was to get sick leave. Here is the translation.

To Get Sick Leave-Pfc. Jack Tyson is expected here on a 10-day sick leave today from Camp Macall, N.C., where he was injured in a football game two weeks ago, shortly after his return to camp from a furlough spent in Battle Creek. He is the son of Mr. and Mrs. Victor Tyson of 1835 West Goguac. Private Tyson is a paratrooper attached to a field artillery battalion. His wife, the former Miss Rosalene Richardson, who has been residing with him at Hamlet, N.C., will accompany him home. Private Tyson has been in the army nine months and is a former employe(sic) of United Steel & Wire Co. 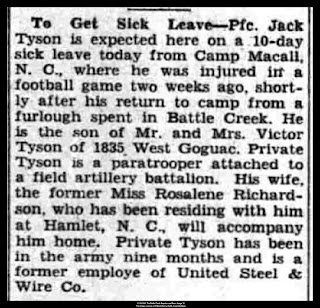