Have You Ever Conducted Research in Talbots? I Have

During my Great Big New England Genealogy Tour a few years ago, one of the places I wanted to go to was Hingham, Massachusetts. The Hingham Historical Society Archives at Old Derby Academy in Hingham has many records on my Fearing, Hobart, Beal, Hersey, and Mayo families.

Unfortunately, renovations were being done at Old Derby and I had to go to an offsite building, the Talbots Headquarters on Beal Street, in Hingham. I had arranged an appointment ahead of time and was met by the society's archivist, Michael Achille. Kirk and I had to go through security and we were escorted through Talbot's. The walk to the records took us through the working area of Talbots. It looked like they may have been working on catalog or website layouts. Rows and rows of outfits were laid out. The outfits were being photographed.

Once we arrived at the temporary archives research area, a large room with cage like security for the records and tables for researchers, I had to sign an agreement that I would not share any photocopies of what I found. You won't see any pictures of what I found in this post.

I was hesitant about finding resources that would further my research, but the temporary archives did not disappoint. The archivist, Michael, was extremely helpful. He had pulled a few items for me ahead of time. Once we talked, he was able to find more resources for me.

The biggest and best record in the collection is the Loring Notebooks. There are 150 plus notebooks with a wealth of family information. Michael had pulled the ones relating to my surnames. The Loring Notebooks have handwritten genealogy transcriptions, tax records, real estate records, and newspaper gossip pages. Other primary sources include who lived in the historic homes, when they lived there, who were their neighbors, did they have servants, and how wealthy were they. I spent most of my time going through these notebooks.

John Fearing, James Hobart, and Peter Hobart homes are still standing in Hingham. I recorded their addresses in order to drive by the residences. One thing about Hingham homes is if it is a historic home, it has a special marker on the house. 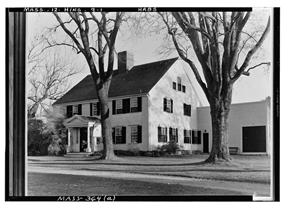 Source: From the Historic American Buildings Survey at Library of Congress. No known restrictions on images made by the U.S. Government

The next treasure was a Beal ledger book. The Beal family arrived in Hingham, Colonial America, in 1638, from Hingham, England. 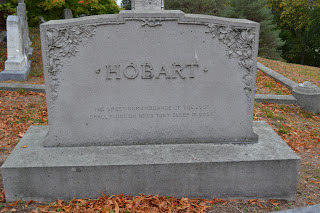 One book in their archives, Not All is Changed-A Life History of Hingham, by Lorena Laing Hart and Francis Russell Hart was recommended. Due to time constraints, I was only able to peruse it, but Allen County Public Library Genealogy Center has a copy and I have it on my list to look at next time I go to Fort Wayne.
One thing I learned on my New England genealogy tour was to search for unique archives. The Hingham Historical Society Archives at Old Derby Academy is a gem that should be included on any Hingham ancestors research list.

Posted by Brenda Leyndyke at 10:05 AM