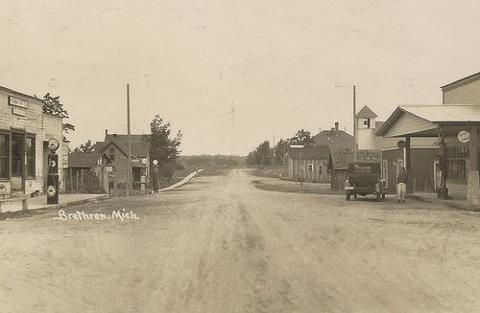 An undated photograph of Brethren, Michigan.

I never visited my aunt and uncle, Kate and Carl Tritten, when they had the store on N. Coates Hwy, in Brethren, Michigan. My stories come from my mother, Audrey, who went to live with her sister, Kate, at the age of nine.

She tells stories of having to clean and polish the wood floors of the store, pumping gas, babysitting Kate and Carl's children, Katherine Marie and John, stocking shelves, and waiting on people. I don't have a picture of the inside of the store, but I have a few that were taken outside of the store. 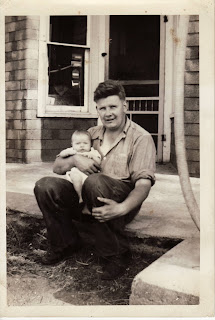 Carl Tritten holding his daughter, Katherine Marie Tritten, on the steps of the store. 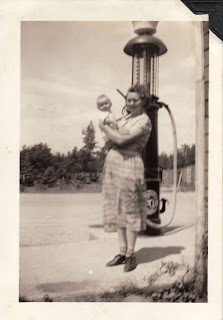 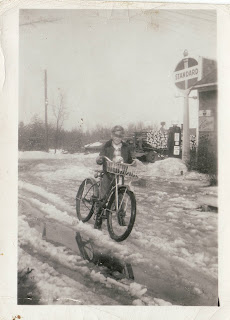 John Tritten on his bike. The gas pumps are behind him, the store would be to his left. To John's right were railroad tracks. The store was a stopping place for the train. The train would pick up mail bags that were hung on a hook. If no passengers were getting on at this stop, the train didn't stop. The train would slow down so the mail bag could be grabbed. My mother told the story of how it was her sister's (Kate) job, but my mom would have to go out and hang the bag. 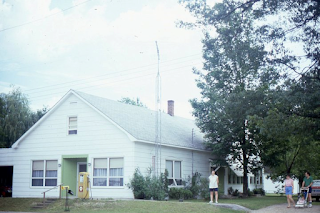 1984 picture of Aunt Kate's home. The store entrance would have been at the front of the house.
The Trittens lived there for many years. The room that was originally the store was a huge room. A bathroom was added at some time. There was a large dining table and huge hutch on one end. A washer and dryer were near the kitchen. The other half of the room was a living room type area and an office area.

Posted by Brenda Leyndyke at 8:15 AM