The Birth Anniversary of Estella Fenn Shaw 175 Years Ago 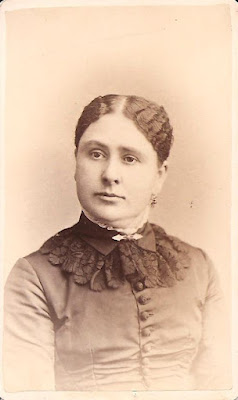 Source: Family data, Hattie L. "Fenn" Glover Family Bible, The Holy Bible: with Revised New Testament, (Chicago: GW Borland & Co., 1882); original owned in August 2022 by Brenda Leyndyke, [
Estelle Jane Fenn, daughter of Daniel C. Fenn and Jane E. Poor was born on 8 September 1847, in Jackson, Michigan. Estelle lost her mother when she was seven months old. Her father, Daniel C. Fenn married Jane's sister, Elizabeth Poor between 1848-1850.
Estelle spent most of her life in Jackson, Michigan. She married James Shaw in Jackson on the 10th of May 1866.  Later in her life Estelle travelled to Florida and California to spend her winters there.
Estelle died 13 July 1934, of cardiac degeneration, in Jackson, Michigan. Interestingly, I found her obituary in my local Battle Creek newspaper archives.

Source: Obituary: Local Woman's Sister Succumbs in Jackson, Battle Creek Enquirer, Battle Creek, Calhoun, Michigan, United States, 15 July 1934, page 3; column 6.
LOCAL WOMAN'S SISTER SUCCUMBS IN JACKSON
Mrs. Estelle Shaw Was Member of Prominent, Mother of Publisher.
Mrs. Estelle Shaw, member of a well known family of Jackson and sister of Mrs. Hattie Glover of Goguac lake, died at 2:30 o'clock Friday afternoon at the home of her daughter, Mrs. R.H. Rossman, in Jackson. Mrs. Shaw was the widow of the late James F. Shaw, who was a prominent shoe merchant of Jackson. She had been ill about two weeks according to the message received by her Battle Creek relatives.
Mrs. Shaw is survived by two children, the daughter at whose home she died and a son, Arch Wilkinson Shaw of Chicago, well known publisher.  She is also survived by the sister, Mrs. Glover, who lives with her daughter, Mrs. Victor Tyson, 103 Lakefront, Goguac lake and two brothers, Tully D. Fenn of route five, Battle Creek and George Fenn of Hersey, Osceola county. Mrs. Shaw had often visited in Battle Creek.
Funeral services will be held Monday afternoon at 2:30 from the daughter's home in Jackson.  All of the Battle Creek relatives will motor over to attend the service.  Burial will be in Jackson cemetery.
Posted by Brenda Leyndyke at 8:07 AM