A Lighthouse Keeper in the Family 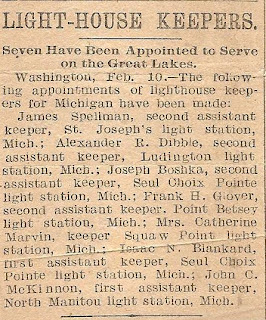 My husband and I have been vacationing in Frankfort, Michigan the last couple of years.  This year we were able to tour Point Betsie.  The tour includes climbing to the light, exploring the living quarters, and seeing other buildings on the grounds. 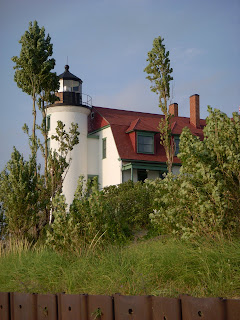 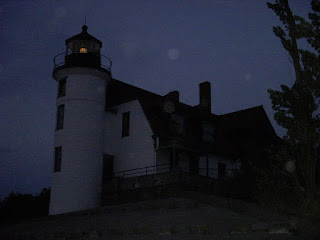 The light is on!
Point Betsie Lighthouse
August 2010 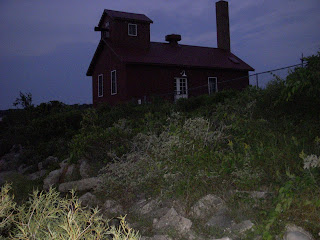 The fog signal building is north of the lighthouse and is newly renovated.  Directly east (right) of this building is the old oil storage tank.  Lake Michigan is to the west (left) in this picture. 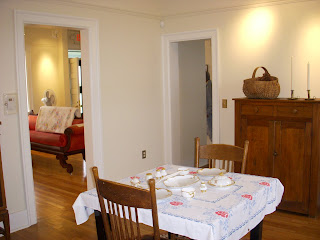 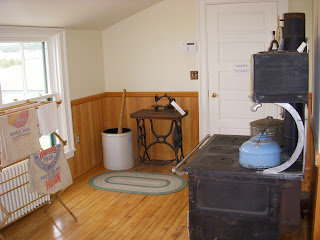 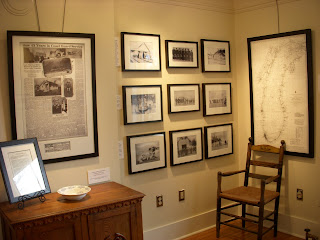 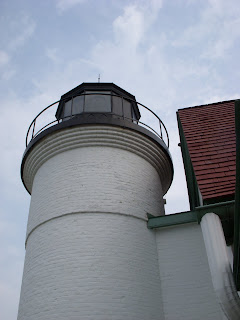 As I toured the lighthouse, I tried to imagine the work that my great grandfather had to do.  He was a lighthouse keeper at a time when it was one of the hardest jobs to do.  Keepers worked long hours and under harsh conditions.  Jonathan P. Hawley's book, Point Betsie, describes the requirements for being a lighthouse keeper, "persons selected be between eighteen and fifty years of age, preferably married, able to read, write and keep simple financial records, and possess skills requisite to performance of station duties." (p 32)

Those duties were laid out by the Chairman of the Lighthouse Board.  First and foremost was "the lamps shall be lighted punctually every day at sunset, and extinguished at sunrise."  Secondly, "the lamps shall be kept burning, bright and clear, every night, from sunset to sunrise; and in order that the greatest degree of light may be uniformly maintained, the wicks must be trimmed every four hours, or oftener if necessary, and clean glass chimneys fitted on; and special care must be taken to cut the tops of the wicks exactly even, to produce a flame of uniform shape, free from smoky points." (Hawley p. 32)

Other duties include cleaning the plate glass, ventilating the lantern, maintaining moveable machinery, maintaining stores, utensils and apparatus of all equipment, keeping a daily journal of oil used, weather conditions and important events, taking notice of shipwrecks and recording circumstances.  All this was done in 1858 for the yearly salary of $350.

Point Betsie lighthouse keepers lived at the lighthouse.  They would work 24 hours a day; 7 days a week.  The light of Point Betsie was lit by fuel.  The lamp would be lit at sunset and have to stay lit until sunrise.  The keepers at Point Betsie would have to go to the fuel storage tank, which was separate from the lighthouse, and carry the fuel back to the lighthouse.  The keepers were only allowed enough fuel for a couple of hours of light.  I can't imagine how careful he would have had to be with the fuel.  I climbed the wrought iron stairs to the light.  You had to be careful of low clearances and the opening to the light was narrow.  In order to get back down the stairs you had to turn around and go down backwards!

At the time my great grandfather was working at Point Betsie he had 2 children:  Harry, my grandfather, and Claude.  Hawley's book on page 147 states Frank H. Glover had a daughter born at the lighthouse.  Frank and Hattie Glover only had one daughter, Adeline.  She was born 17 February 1898.

As I watched the sunset at Point Betsie I was thinking of a time 110 years ago when my great grandfather, great grandmother and grandfather walked the same shore.  Did they look for Petoskey stones like I did?  Did they swim and play on the beach? I don't know if lighthouses can be in your blood, but I know Point Betsie is a beautiful lighthouse, one I am happy to share with them each summer when I vacation in Frankfort.