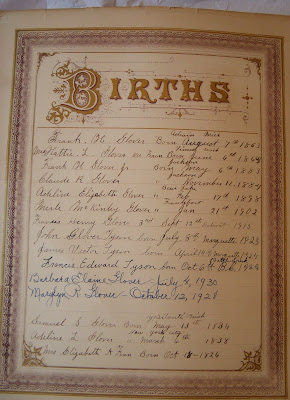 Source: Glover, Hattie L. "Fenn", family data. In The Holy Bible: with Revised New Testament. Chicago: GW Borland & Co., 1882. Original in possession of  Brenda Leyndyke, [ADDRESS FOR PRIVATE USE].
The following births were recorded in Hattie Lodema Fenn Glover's family bible.  The name of the person was followed by birth date and then what I have confirmed is the birth place.  My comments with relationship to Hattie Fenn Glover is what is in parentheses.