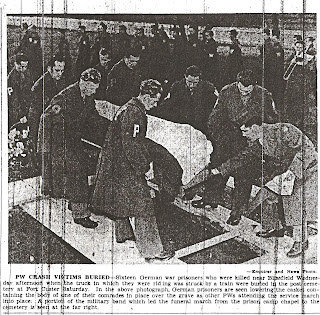 Once a month I try to blog about local, Battle Creek, history.  In July, one of my local posts was a Tombstone Tuesday about German Prisoners of War buried at Fort Custer National Cemetery in Augusta, Michigan.  I have been surprised at the response to that post.  A number of people have emailed me about this post and how it helped them with their research.  One, was a relative of one of the prisoners.

So, I decided to do a little more research.  I checked the Battle Creek Enquirer and News for the week after the accident.  I found three articles and a picture reporting the accident and death of the prisoners of war.

Battle Creek Enquirer and News
1 November 1945
Front Page, Column 5
Continued on Page 8, Column 2
The article above reports of the accident.  Prisoners housed at Fort Custer were on a work detail at a sugar beet farm in Blissfield, Michigan.  On their way back to a branch camp, in Blissfield, the  truck they were riding in was struck by a Michigan Central passenger train.  16 prisoners of war and one military guard, Pfc. Edward B. Loughrin, were killed.

Battle Creek Enquirer and News
3 November 1945
Front Page, Column 6
The bodies were returned to Fort Custer and funeral arrangements were made.  This article explains the funeral service.  A military funeral was held with American honor guards.  The caskets were draped with the German Republic flags.  Three separate services were held: one Catholic, one Protestant, and one prayer service.  This article states that at a later date the bodies may be removed to Germany.  This never happened.  A German memorial with the gravestones of the P.O.W's are currently at Fort Custer National Cemetery in Augusta, Michigan. 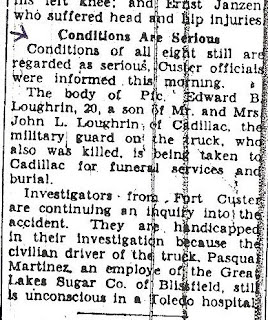 Battle Creek Enquirer and News
2 November 1945
Page 15, Column 4
One other article was found explaining how German flags had to be rushed to Fort Custer from the army quartermaster in Philadelphia to drape the caskets.  It further tells of the prisoners who were injured and survived:  Hugo Adick, Wilhelm Behrendt, Augustin Bader, Bruno Baudach, Heinz Becker, Fritz Bieger, Gerhard Hensel, and Ernst Janzen.  The body of the military guard, Pfc. Edward B Loughrin was taken to Cadillac, Michigan for burial.

If you click on the articles you can zoom in on the article for better reading.  Please feel free to email me at brae957 at gmail dot com if you would like me to send you the articles.
Posted by Brenda Leyndyke at 7:00 AM