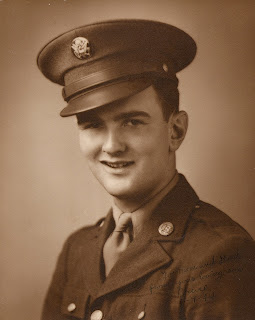 In honor of Veteran's Day, I decided to post about my father's World War II service.  Bruce David Glover turned 18 in February of 1943 and had to register for the draft.  He graduated from Hazel Park High School in June of that year.  The day after graduation he was bused to Detroit and sworn in as a private in the Infantry of the United States Army.  He had wanted to be in the Air Force but was denied for not having 20/20 vision.

He had a two week furlough before being sent to Fort Custer, Battle Creek, Michigan to begin his Army training.  At Fort Custer he went through a briefing and orientation and after a few days he was on a troop train to Fort Hood, Texas.  Dad spent 13 weeks at Fort Hood for basic training.  In his autobiography, that he is still working on, my dad talks about 25 mile hikes with 25 or more pound packs.  My dad entered basic training weighing 140 pounds and 13 weeks later, he weighed 173 pounds.  He attributes it to eating everything in sight.  I have a feeling a lot of it was muscle gain.

My dad was trained as a BAR man-Browning Automatic Rifle, which had a clip of 20 bullets and fired rapidly.  He and other soldiers wondered about where they would be deployed-Pacific theater or European one.  At the completion of his basic training he wasn't sent overseas, he was sent to Hendrix College for special army training.  He spent three months there.

Next, he was sent to Camp Maxey near Paris, Texas.  He was here into the summer of 1944, one year after enlisting.  In September of 1944, Dad was on a train and deployment to the European theater was eminent.  The train trip made stops at Camp Robinson, Little Rock, Arkansas, then Fort Dix, near Boston.  From here, he was shipped to Southampton, England, on to Chester, England and eventually the front line in the Ardennes forest.

16 December 1944 finds my dad in the middle of the Battle of the Bulge.  He describes his experience of being in a fox hole with pieces of shrapnel landing beside him.  Thankfully, he wasn't injured.  A buddy of his, Bill Fisher, was captured and became a prisoner of war.

After this battle, the company regrouped.  During a medical exam my dad was found to have 'trench foot'.  He was sent to Liege, Belgium to a temporary hospital and then on to Paris, France and Birmingham, England.  He spent two months in the hospital.

My dad heard about officer's training school in Paris, France, while he was in the hospital.  He applied and was accepted.  He went for training upon release from the hospital.  He was housed in Fontainebleau, France which was once Napoleon's Castle.

He completed officer's training school shortly before the war in Europe was over.  He figured he would be sent to the Pacific front, but he was sent to Czechoslovakia with the 94th division.  He spent 2 months performing police officer like duties.  He was sent from Czechoslovakia to Marseilles, France.  It was during this train trip that he saw first hand the devastation created by war.

In 1945, my dad arrived in New York.  He said he was never so happy to see and appreciate the sight of the Statue of Liberty.  He was given a two week furlough to see his parents and brother before being sent to Fort McClellan, Alabama.  At Fort McClellan, my dad was a physical training and bayonet instructor, at the age of 20.  He still thought he would be sent to the Pacific.  It was during this time that my dad believes led to his decision to be a teacher and coach.  He played and coached a recreational basketball team.  Throughout my dad's writing about his service time, he intersperses information about sports.

My dad never talks about his years in the service.  He sent me a copy of his autobiography when he was having computer trouble.  I kept the file and when preparing to write this post, I referred to it.  I am proud of the service my dad provided during the war.  He was one of the lucky ones.  He came home.  Thank you to all the servicemen and women who make it possible for us all to enjoy our life and freedom.

Do you have a veteran in your family?  Be sure to thank and honor them on this Veteran's Day. 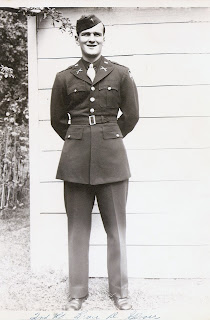