Mystery Monday: Who is Catherine Wheeler?

The first time I saw the name Catherine Wheeler was in the 1900 United States Federal Census for Crystal Lake Township, Benzie, Michigan.  She was living with Frank H. Glover and family.  Like a good genealogist, I was checking the census records for my great grandfather, Frank H. Glover.  Catherine Wheeler's relationship to head of household was listed as mother-in-law.  This was early in my research and at the time I did not know who the parents of Frank's wife, Hattie, were.  So, I thought I had found a clue.

Next, I decided to research Frank and Hattie's marriage.  I ordered the Jackson Michigan Marriage Records (1867-1883), Film Number 0941634 at my local family history center.  It is here, on record number 568, that I confirm that Hattie's maiden name is Fenn.  (My father told me he thought that was her name.)  So, who is Catherine Wheeler, had she remarried?  As I look at the marriage record, I read the witnesses names, one is Frederick Wheeler.  OK, now I am intrigued.  How do these Wheelers fit into my family?

In the mean time I continued my Glover and Fenn research establishing Hattie's parents as Daniel C. Fenn and Elizabeth Poor.  Now I really was confused.  Who the heck was Catherine Wheeler and why was she listed as mother-in-law in the census? 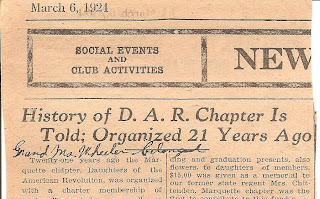 I eventually gave up on that puzzle until I received Hattie's Bible.  Here I find Catherine Wheeler again.  A newspaper article dated March 6, 1924 was stored in the Bible.  The article, "History of D.A.R Chapter is Told:  Organized 21 Years Ago" has a handwritten note stating "GrandMa Wheeler belonged".

Halfway down the article is this, "Later a Real Granddaughter was added to the member list-Mrs. Catherine Wheeler."  This article discusses the history of the Marquette(Michigan) chapter of D.A.R.  Here we go again, who is Catherine Wheeler? 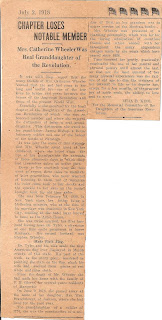 Further on in Hattie's Bible I find a July 2 1918 newspaper article, "Chapter Loses Notable Member" "Mrs. Catherine Wheeler was Real Granddaughter of the Revolution"  The article says she is mourned by the local DAR chapter and had the distinction of being a real granddaughter .  She owed this distinction to her  grandfather, James Bishop, a hero of the battle of Saratoga.  Bishop?  Don't have any Bishops, that I know of, in the family.  It goes on to say she was born, 18 February 1828, in New York state.  Her father was a Methodist minister.  She was married twice.  First, to a Dr. Tyler who was a physician at one time in lower Michigan.  Second, to Stephen Wheeler.  The only mention of Frank and Hattie is "since the death of Mr. Wheeler she had made her home with the family of F.H. Glover, for several years residents of Marquette.  Catherine Wheeler passed away on June 9, 1918 at the home of her daughter, Mrs. Wm. Branchflower of Jackson, where she had lived for the past year.

I find Catherine Wheeler a mystery.  I have never been able to find anything about the Wheelers.  The woman who gave me the bible doesn't know who she is.  I don't know what her connection was to my great grandparents, but I would love to know.  She sounds like a wonderful women.
Posted by Brenda Leyndyke at 7:00 AM