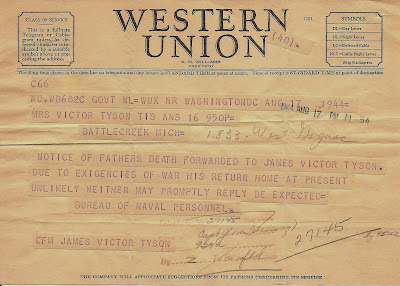 Source:  Glover, Hattie L. "Fenn", family data. In The Holy Bible: with Revised New Testament. Chicago: GW Borland & Co., 1882. Original owned in August 2011 by Brenda Leyndyke, [address for private use], Battle Creek, Michigan.
Sent Aug 17, 1944 to Mrs. Victor Tyson 1833 West Goguac Battle Creek, Mich
NOTICE OF FATHERS DEATH FORWARDED TO JAMES VICTOR TYSON.
DUE TO EXIGENCIES OF WAR HIS RETURN HOME AT PRESENT
UNLIKELY NEITHER MAY PROMPTLY REPLY BE EXPECTED=
BUREAU OF NAVAL PERSONNEL
CFM JAMES VICTOR TYSON
The above telegram was found in my great grandmother's bible. (Hattie Fenn Glover)  The telegram is in response to a notice sent to James Victor Tyson informing him that his father died.
The people in this telegram are as follows:
When I first found this telegram in the bible I thought about how hard it must have been for James Tyson to find out his father had died while he was fighting World War II.  I didn't know a lot about the family at this point.  I have since done a little research.  It is sad to think that my great aunt and her family were living in Battle Creek at the time I moved here and I didn't know it.  I would have loved to have talked to her.  I called her son, Jack, once, but he wasn't receptive to meeting and I never pushed it.  He has since died.
﻿
Posted by Brenda Leyndyke at 7:00 AM