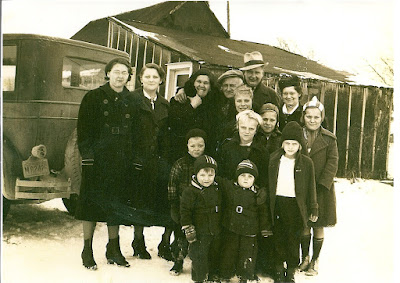 The Otto and Daisy Fredrick Family
L-R Back:  Lola Fredrick, Marie Fredrick, Daisy Graf Fredrick, Otto Fredrick,
Carl Tritten, Kathryn Fredrick Tritten,
Row 3 L-R: Otto Robert Fredrick, Richard Frederick, Leona Fredrick
Row 2 L-R:  Ray Fredrick, John Fredrick, Audrey Fredrick
Front Row L-R:  Twins, Norman Fredrick, Norma Jean Fredrick
This picture of the Fredrick family was taken in the late 1930's.  It is one of the few I have seen where my grandfather, Otto Fredrick, is smiling.  Plus, he has his arm around my grandma, a rare showing of affection.
I have a couple of pictures that were taken with this house in the background.  I had assumed that it was on the family farm.  I was looking at it with my mother and I asked where this was taken and she said it was taken at the home of William and Mary (Graf) Tritten near Brethren, Michigan.  Mary Tritten is Daisy Graf Fredrick's sister.
You may notice that I spelled Richard's last name as Frederick.  That is the spelling that is used on his birth certificate and he used that spelling throughout his life.
Posted by Brenda Leyndyke at 7:00 AM