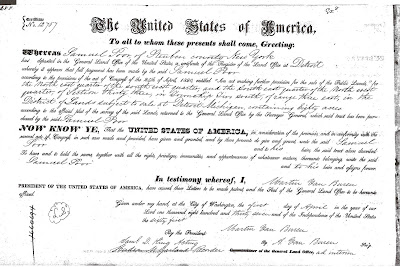 The above record states that" Whereas, Samuel Poor, of Steuben county New York has deposited in the General Land Office of the United States, a certificate of the Register of the Land Office at Detroit whereby it appears that full payment has been made by the said Samuel Poor according to the provisions of the act of Congress of the 24th of April 1820, entitled "An act making further provision for the sale of the Public Lands" for the north east quarter of the south west quarter, and the south east quarter of the north west quarter, of Section thirty three, in township two south, of range three east, in the District of Lands subject to sale at Detroit Michigan, containing Eighty acres according to the official plat of the survey of the said lands, returned to the General Land Office by the Surveyor General, which said tract has been purchased by the said Samuel Poor."

Land Patent Details
Michigan was barely two months into statehood when my ancestor, Samuel Poor, was issued eighty acres of land in Washtenaw County, Michigan.  Samuel Poor's land was in Township 2S-Range 3E, which is Sylvan Township, it was the Northeast quarter of the southwest quarter and the southeast quarter of the northwest quarter of Section 33.  The highlighted section of the map below is Section 33 of Sylvan Township, Washtenaw County, Michigan.  This map is from 1874 and there aren't any Poor's living in the area at that time. 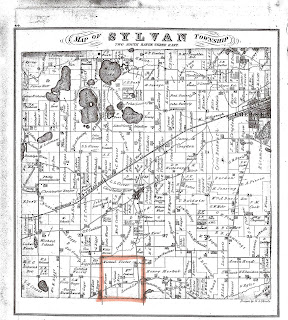