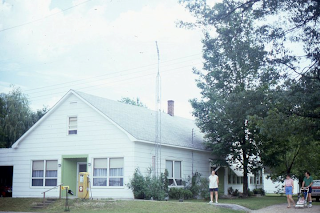 July 1983 View of Tritten Home
The front of the house is where the store use to be,
it was converted into a family room and no longer used as a store.
(Left to Right:  Linda, Brenda, Kirsten and Kirk)

Every genealogist I know has been eagerly awaiting the release of the 1940 Census images and I was too.  I was on vacation the first day the images were online and I had to wait a couple of days before I got my chance to look at them.  I have spent the last month looking for ancestors in the census.
The first person I wanted to find was my mother.  My mother went to live with her sister when she was nine or ten, so I wasn't sure if she would be found with her parents or her sister.  I was very lucky to find her on page one, she was living with her sister.  I was surprised to see another sister, Lola, living there as well.  I asked my mom about it and she said, Yea, Lola lived there and helped around the house and with taking care of her niece.

Here are the 1940 Census Images for the Carl Tritten household, found in Brethren, Manistee, Michigan.

Who's Who:
Carl Tritten, my uncle and godfather owned the house and store at this location.  The store was located in the front of the house. (It is a pizza place now.)  It sold gas in addition to other household items and food.  My mother remembers helping in the store and scrubbing the wooden floors on her hands and knees.  When someone would buy gas, she would have to go outside and hand pump the gas to get it from the underground tanks. It would fill up in a glass globe on top of the pump and then went from here to the car, via a hose similar to what we have today.

Kathryn L. (Fredrick) Tritten, my aunt and godmother.  The oldest daughter of Otto A. Fredrick and Daisy (Graf) Fredrick.

Lola M., my aunt, second daughter of Otto A. Fredrick and Daisy (Graf) Fredrick.  She is listed as a maid in a private home.  She was working in Uncle Carl's house.

Audrey J., my mother, and the eighth of eleven children born to Otto A. Fredrick and Daisy (Graf) Fredrick.

Louis Contardi, a boarder and school teacher at Brethren, Michigan.  The school was just a short two block walk from here.