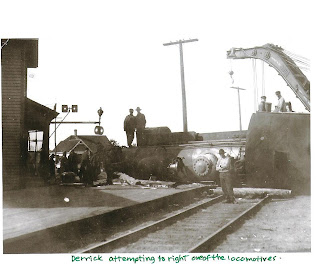 I knew that my great grandfather, David Watt, had been injured in a train accident during his time as a train engineer, but I didn't know the extent of the accident.  My dad remembers his grandfather being scarred and part of his ear missing.  My cousin Judy sent me pictures of the intersection where the accident happened and the aftermath of the accident.

I had been wanting to get a newspaper article about the accident for awhile and finally found one.  There is something about reading a newspaper account of the accident that affects me.  My thoughts after reading it was: 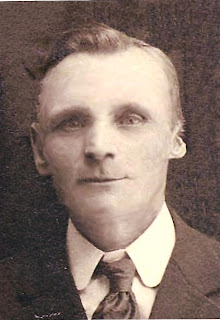 Picture of David Watt taken sometime after his train accident in 1913.
Notice part of his left ear is missing.

David Watt survived his burns and lived another 32 years.  In addition, he eventually went back to work.  What a strong, courageous man he must have been.  I can only get to know him through articles like this and my father's memories of him.  Memories I will cherish.

Several coaches were derailed and an engine each on the Soo Line and South Shore roads suffered considerable damage as a result of a collision which occurred last night at the joint railroad crossing at Trout Lake, when South Shore train No. 2 collided with the Soo line train No. 7, which left this city last night at 6:20 o'clock.

The exact cause of the collision has not yet been learned.  All of the passengers on both trains were considerably jarred when the two trains struck and some, it is stated, were bruised quite badly.

From the information obtained so far, the only person who sustained serious injuries was David Watt, engineer on South Shore engine No. 2, who was severely burned.

The engines were about demolished and the coaches were damaged slightly.  It is stated that the South Shore train has the right of way at the crossing.  It is possible that the Soo Line engineer did not notice the approaching train, as there was a string of box cars on the "Y", which, it is thought, would obstruct his view.

David Watt, of Marquette, engineer on the South Shore train, was penned in his cab when the engines struck and was severely scalded by escaping steam and water from the boiler.  He was rushed to St. Ignace as soon as possible, where physicians are endeavoring to save his life.  A special train carried Mrs. Watt to the bedside of her husband in St. Ignace in record time.  Other passengers were severely jarred up and one woman suffered a broken finger.

The hands of the depot clock at Trout Lake stopped at 7:46, recording exactly the time of the collision for when the engines struck the depot the clock was stopped.  Considerable damage was also done to the depot."

Posted by Brenda Leyndyke at 8:01 AM