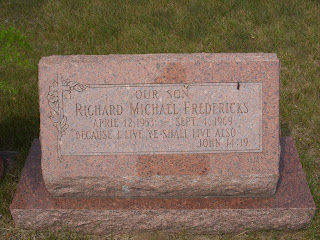 Richard Michael Fredericks, or Ricky as the family called him, was the only son of Richard L. Fredericks and Marilyn Wendt Fredericks.  Ricky was my first cousin and died way too young, at the age of 16.  I remember Ricky's smile, it seemed to take in his whole face.

Ricky was killed in a car accident.  He was driving and came up the crest of a hill and saw a tractor in the same lane.  He tried to avoid it by passing and lost control of his car, rolling several times.  The saddest part of this accident is that his father, Richard, owned the towing company and was called to the accident.  No one knew it was his son in the accident.