Two years ago, I posted a birthday post on Kirsten's birthday.  It was on my memories of the day she was born.  Last year, I wrote about her first birthday.  Today, I will celebrate her birthday with memories of 1985, her second birthday. 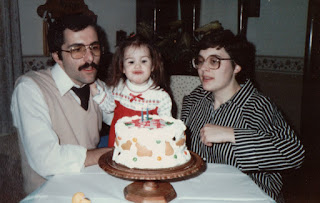 Kirsten blowing her candles out with Dad and Mom's help.

I remember celebrating Kirsten's birthday quietly at home.  Kirsten's grandparents, Jim and Betty Leyndyke were there to help us celebrate.  The cake was made by one of Kirk's students and given to Kirk as a gift, so we decided to use it as a birthday cake.  It was chocolate with white frosting. 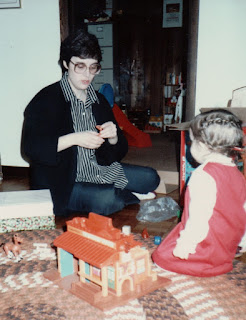 During the day of Kirsten's birthday, I took her to the Elaine's Beauty Shop.  Kirsten called it Vaseline's for some reason.  I was going to have her hair trimmed.  Elaine found out it was her birthday and braided it and sprayed it with sparkles.  Kirsten loved it.  Kirsten had beautiful long, almost black hair at this age. 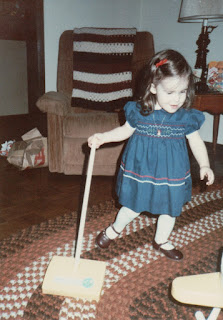 Playing with one of her gifts, later in the week.  The vacuum actually worked.  I wonder if Kirsten vacuums in a dress now.

For as long as I can remember Kirsten loved to wear dresses.  The blue dress above was a Polly Flinder's dress, which was popular for little girls at that time.  The hand smocking on the front was indicative of Polly Flinders.  Unfortunately, they no longer make Polly Flinder dresses.  They were beautiful.  The red dress she wore on the day of her birthday was a Healthtex knit dress.

I remember spending many hours playing Western Town with Kirsten.  We went through a few magna doodles too.  They seemed to get stepped on for some reason.  Kirsten loved helping me at this age and her gifts reflected that.  It was a great day in December.

Posted by Brenda Leyndyke at 8:03 AM