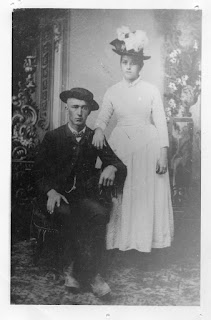 Recently, I wrote a Motivation Monday post about receiving this picture.  A cousin, Hannah, found me through my blog and emailed me.  She offered me a copy of Valentine and Nancy Graf's wedding picture, if I would like it.  WOULD I LIKE IT?  Yes, Yes, and Yes!

Hannah's great grandmother, Nina Graf Johnson, and my grandmother, Daisy Graf Fredrick, were sisters.  Thank you Hannah, for reaching out to me and sharing a treasured picture with me.

Valentine Graf was born 14 December 1865 in Amboy, Miami, Indiana, United States to Casper Graf and Mary Wrightweasner.  He lived his early years in and around Miami County, Indiana.  Sometime between 1900 and 1905 he moved to Brethren, Manistee, Michigan.  He lived there until his death, 13 January 1933.

Valentine and Nancy Graf were the parents of 10 children, 3 whom died in infancy:
I have never seen a picture of my great grandmother, Nancy Graf.  The picture I had of Valentine Graf was from later in his life.  I now have pictures of all eight of my great grandparents, something I never thought was possible.  Now all I need to do is find a place for it on my genealogy wall!
Posted by Brenda Leyndyke at 12:15 PM