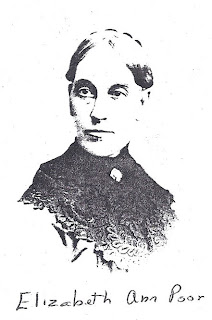 Elizabeth Poor Fenn "endured herself to her neighbors by her earnest Christian character" as her obituary states.  Religion was a large part of her sixty seven years.  She was a member of the Congregational Church for over 50 years.

Elizabeth's family migrated to the Washtenaw County, Michigan area by 1840.  Did they travel by the Erie Canal or by wagon and horses?  Either way, travelling with her young siblings had to be a challenge.  I don't know for sure, but I bet prayer was needed to make the long trip to a new home.  They lived an agricultural life in the early years of Michigan statehood, settling in the Sylvan Township area of Washtenaw county.

The role of religion in her life was evident by 1846, based on the Parting Hymn that I found in her daughter Hattie's Bible.  The fact that the handwritten verses were saved all these years makes it important. 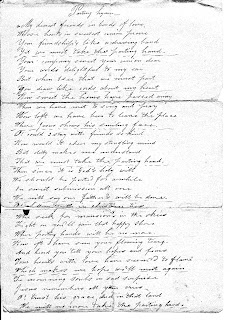 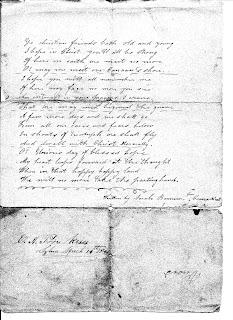 Elizabeth would need to rely on her faith to get through the year 1848.  First, her sister, Jane E. died in April of 1848 and less than four weeks later, her mother, Eleanor Begole Poor died.  It is during this time that Elizabeth marries.  Elizabeth Ann Poor married her sister's(Jane), husband, Daniel C. Fenn.  She became an instant mother to Daniel and Jane's infant daughter, Estelle.

Daniel, Elizabeth, and Estelle spent their early time together in Sylvan Township, Washtenaw, Michigan.  It is here that Daniel and Elizabeth started their own family.  Zalton M. Fenn was born in 1850.  He would be joined by three other siblings who lived to adult:  Tully Daniel, born 1859, George 1860 and Hattie in 1864. 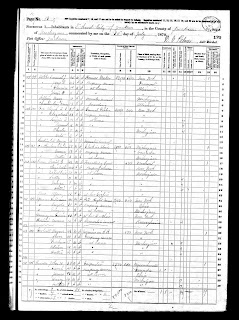 Elizabeth's life ends on 20 Sep 1894 in Hersey, Osceola, Michigan.  Her obituary shows the christian life that she led. 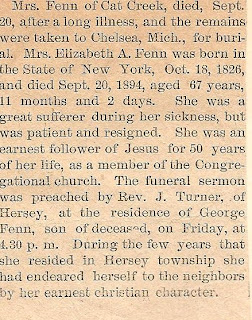