It isn't often I spend time researching a second cousin, three times removed and if I didn't have the settings on Roots Magic to help me, I wouldn't know the relationship, but Charles W. Glover and Oriska Worden made headlines and I found a lot of them.  Today, many would be found on the front page of a tabloid magazine as sensational as they were.  Why were Charles W. Glover and Oriska Worden newsworthy?  It had to do with beauty, fame and fortune.

Charles W. Glover was the son of Henry Pierce Strong Glover, a millionaire manufacturer and one time mayor of Ypsilanti, Michigan, and Nancy Kishler.  Oriska Worden was the daughter of  F.W. Worden, a decorated Civil War veteran from Michigan.

Charles and Oriska lived a privileged life growing up.  Oriska went to Mount du Chantal Convent School in West Virginia. She ended up at the Conservatory of Music, in Ypsilanti, where she met Charles. Charles grew up in a upper class home as his father was a successful manufacturer in Ypsilanti, Michigan.

They fell in love, married and the rest is history;  except, that Charles and Oriska did not live happily ever after.  Charles and Oriska Worden Glover were married 20 October 1892 in Petoskey, Michigan.  It was during their honeymoon that things fell apart according to newspaper accounts at the time.  Plus, Charles and Oriska didn't have the blessing of Charles' mother, who they were living with until their home was completed. Oriska is quoted as saying, "Nothing I could do seemed to please Charley's mother."

A few months after marriage Oriska decides to move to Paris to further her music education. Charles would not follow her.  It is during her time in Paris that Charles decides to divorce her.  Oriska returns to the United States three years later and finds out about this divorce.  She states she wasn't notified of his attention to divorce.  This is where the newspaper accounts get tabloid-ish.

Oriska intends to sue Charles for $10,000 a year alimony.  She intends to name his parents in a $100,000 suit for alienation of her husband's affection.  Oriska at this time is a well known, successful, opera singer. Hence, the front page news.  The news of her intention to sue and all the details of her marriage is covered nation wide.  Below is just one of many news articles I found.  Transcription is below. 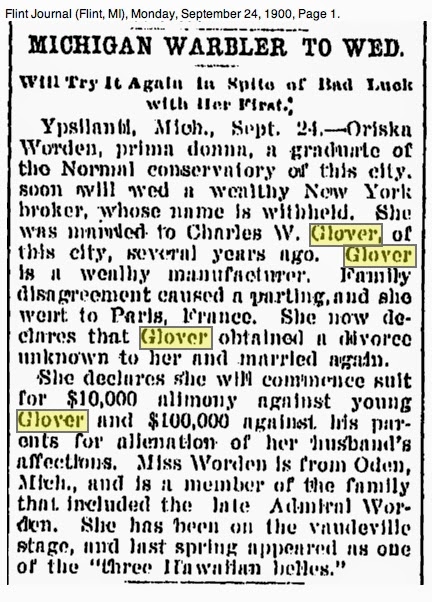 Ypsilanti, Mich., Sept 24.-Oriska Worden, prima donna, a graduate of the Normal conservatory of this city, soon will wed a wealthy New York broker, whose name is withheld.  She was married to Charles W. Glover of this city, several years ago.  Glover is a wealthy manufacturer.  Family disagreement caused a parting, and she went to Paris, France.  She now declares that Glover obtained a divorce unknown to her and married again.

She declares she will commence suit for $10,000 alimony against young Glover and $100,000 against his parents for alienation of her husband's affections.  Miss Worden is from Oden, Mich. and is a member of the family that included the late Admiral Worden.  She has been on the vaudeville stage, and last spring appeared as one of the "three Hawaiian belles."


In this case, beauty, fame and fortune did not make a good trio.  Oriska and Charles did not have their happily ever after.  I never found information on an actual suit against Charles or his parents.  Charles married Ida May Foss in 1895.  Oriska Worden continued her professional career as an opera singer and vaudeville actress.


Posted by Brenda Leyndyke at 8:07 AM