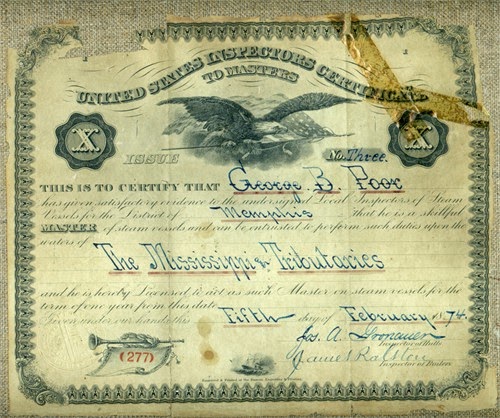 United States Inspectors Certificate for George B. Poor,
Skillful Master of Steam Boats on The Mississippi and Tributaries, 1874.

Have you ever read "The Adventures of Huckleberry Finn"?  This is the image I get when I think about the jobs my second great grand uncle, George Begole Poor had. Huckleberry Finn was set around the years 1835-1845 and George Poor was a ship master during the 1860s-1880's, but I still imagine the Mississippi River as described in Huck Finn.

George Begole Poor, the second child of Samuel B. Poor and Eleanor Begole, was born 29 February 1828 in Steuben County, New York.  He moved with his parents at a young age to Michigan.  Eventually, he moved to the Cairo, Illinois area, where he spent the remainder of his life.

George Poor had a number of jobs throughout his 62 years of life.  The certificate above is only one of many jobs George had.  George's life was detailed in "History of Alexander, Union, and Pulaski Counties, Illinois" book on page 37, available at Google books.  This book combined with help from another Poor researcher gives a pretty good picture of George's working life.

Unfortunately, George's life ended on the Mississippi River.  The last person to see George said he was walking toward the Mississippi River.  He was missing for days and rewards were offered for information on his whereabouts.  His body was found about 50 miles downriver in Hickman, Ky.  George died June of 1890, having spent forty years working in transportation.

Posted by Brenda Leyndyke at 7:41 AM