Those Places Thursday: Yes, There Really is a Kalamazoo! 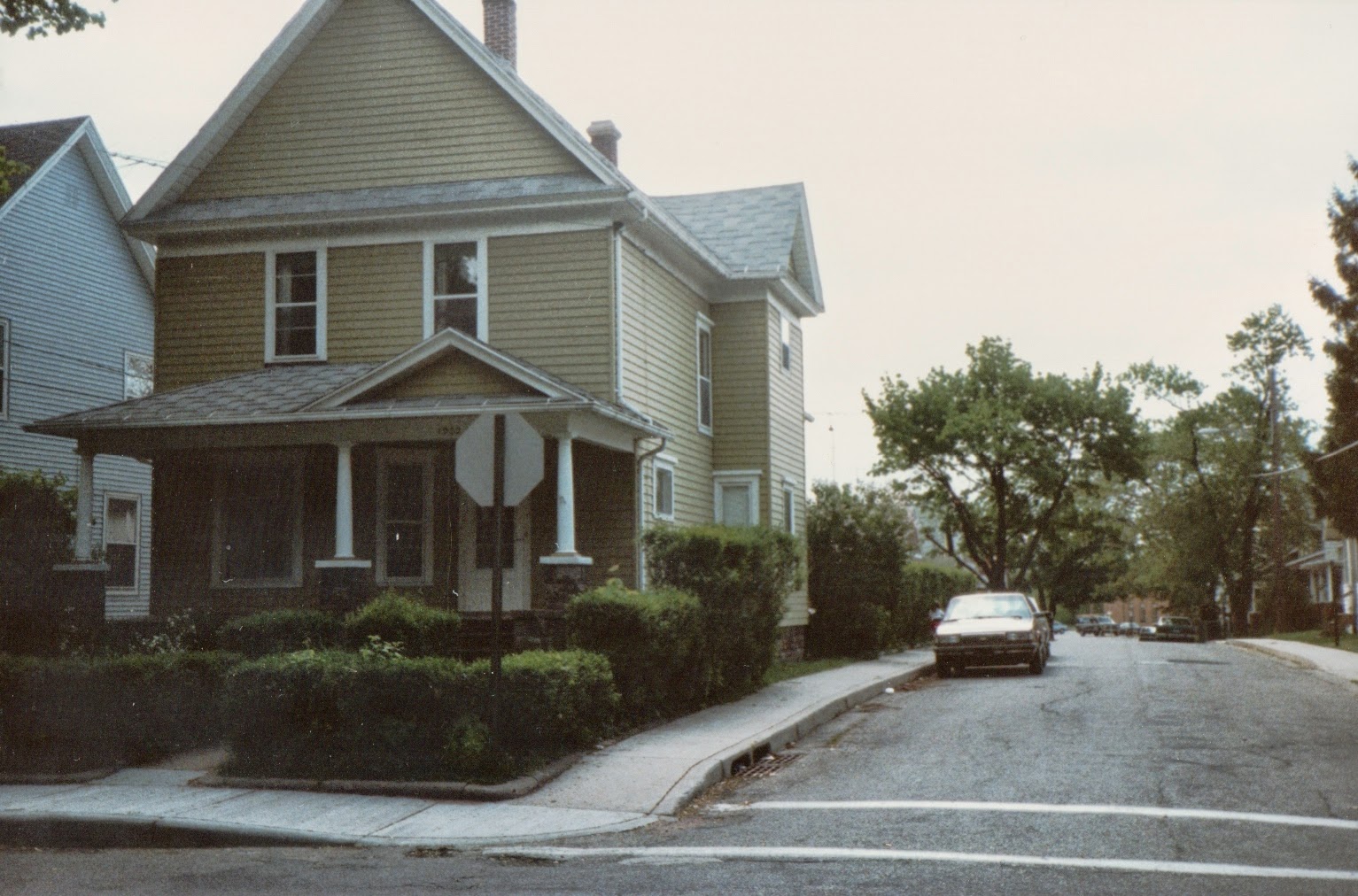 Yes! There really is a Kalamazoo and I lived there twice in my life.  First, was when I attended Western Michigan University.  The next time was when my husband accepted a counseling job at the Lakeview School District in Battle Creek, Michigan. We were unable to find housing in Battle Creek and we moved to Kalamazoo, about 25 miles from Battle Creek.  My friend Mary, and her husband, Matt, knew the owner of the home and recommended us to her.  The house was for sale and we knew it was only a temporary stop in our lives.

This beautiful, two story home sat on the corner of Race and Dewey.  The neighborhood was in transition during the nine months we lived there.  It wasn't a neighborhood I would have wanted to buy a home in. Luckily, we were surrounded by long time residents and they welcomed us with ease.

The home had beautiful lead glass front windows and one side window.  The interior had all original wood trim.  A beautiful wooden staircase greeted you at the front door.  The entrance way could be closed off from the living room with original wood pocket doors, a great way to keep the kids corralled.  A large cement patio and back yard were favorite playing spots for Kirsten and Travis.  It had two bathrooms, four bedrooms, a walk-in attic, living room, formal dining room, kitchen with a set of back stairs to the second floor, a basement with a humongous gravity fed furnace.  It was one of the warmest homes I lived in.

We built many memories in our Kalamazoo home.  It was just a short walk to the Washington Square library and we would walk to it regularly.  A block away was St. Joseph Catholic Church and School with a playground we used on weekends.  It was close enough to downtown Kalamazoo that we could walk it. We only did that once for the Kalamazoo Christmas Parade.  We took advantage of everything Kalamazoo had to offer.  A Children's Health Fair where Kirsten took her cabbage patch doll that's toe stitching had come out, they put a band aid on it for her. Numerous festivals were held at Bronson Park in Kalamazoo and we went to a few. Pumpkin patches, holiday lights, shopping and more were part of our activities that year. Our friends, Matt and Mary, lived close by.  They had three children, Drew, Mitchell and Megan.  We would get together and the kids enjoyed playing with each other, most of the time.

It was a home of many firsts for Kirsten and Travis.  Kirsten was 3 years 8 months old when we moved to Kalamazoo and Travis was seven months old.  The pictures below detail some of the important firsts in Kirsten's and Travis' life.  We lived here from August 1987 to May 1998, just a short nine months. 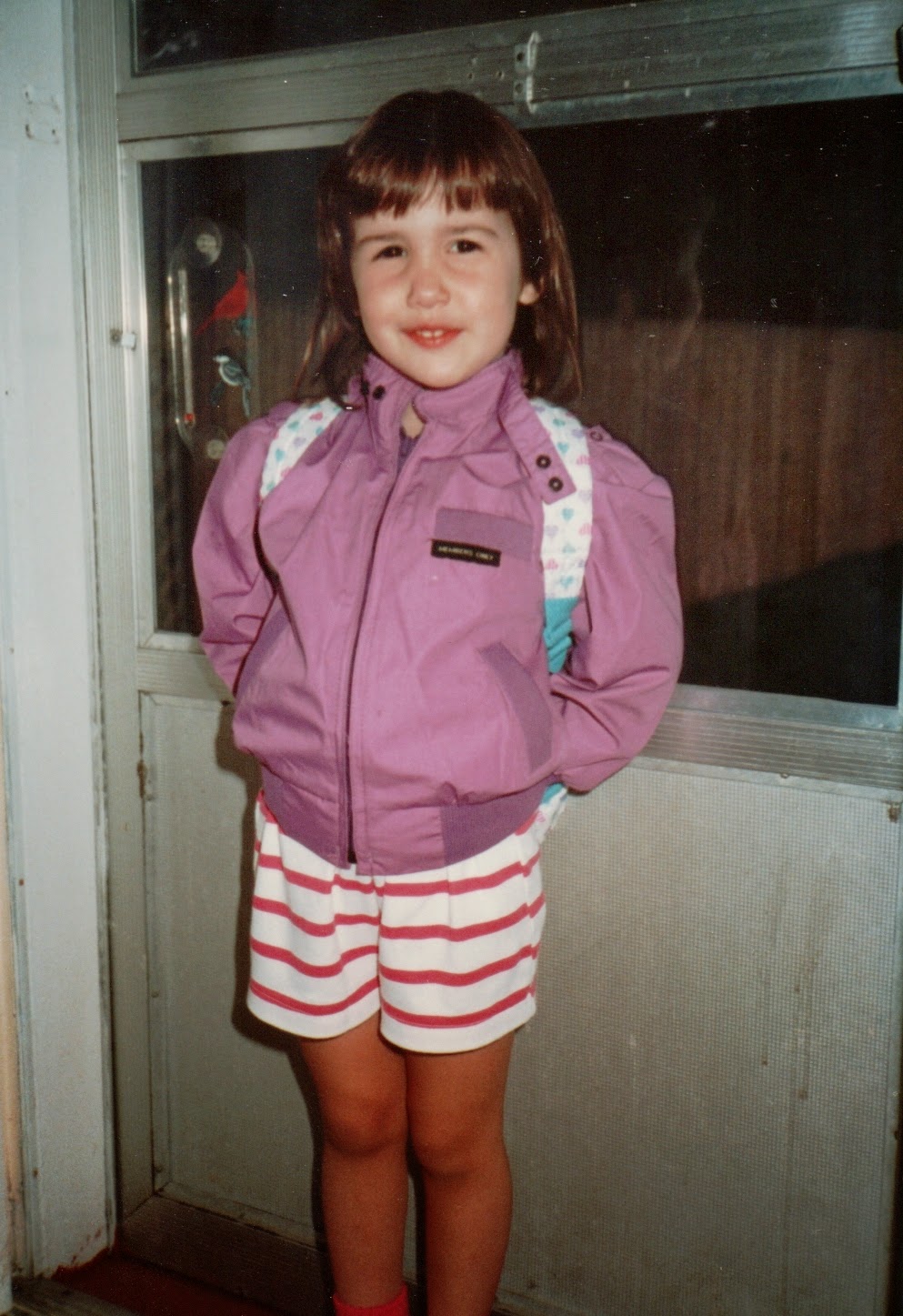 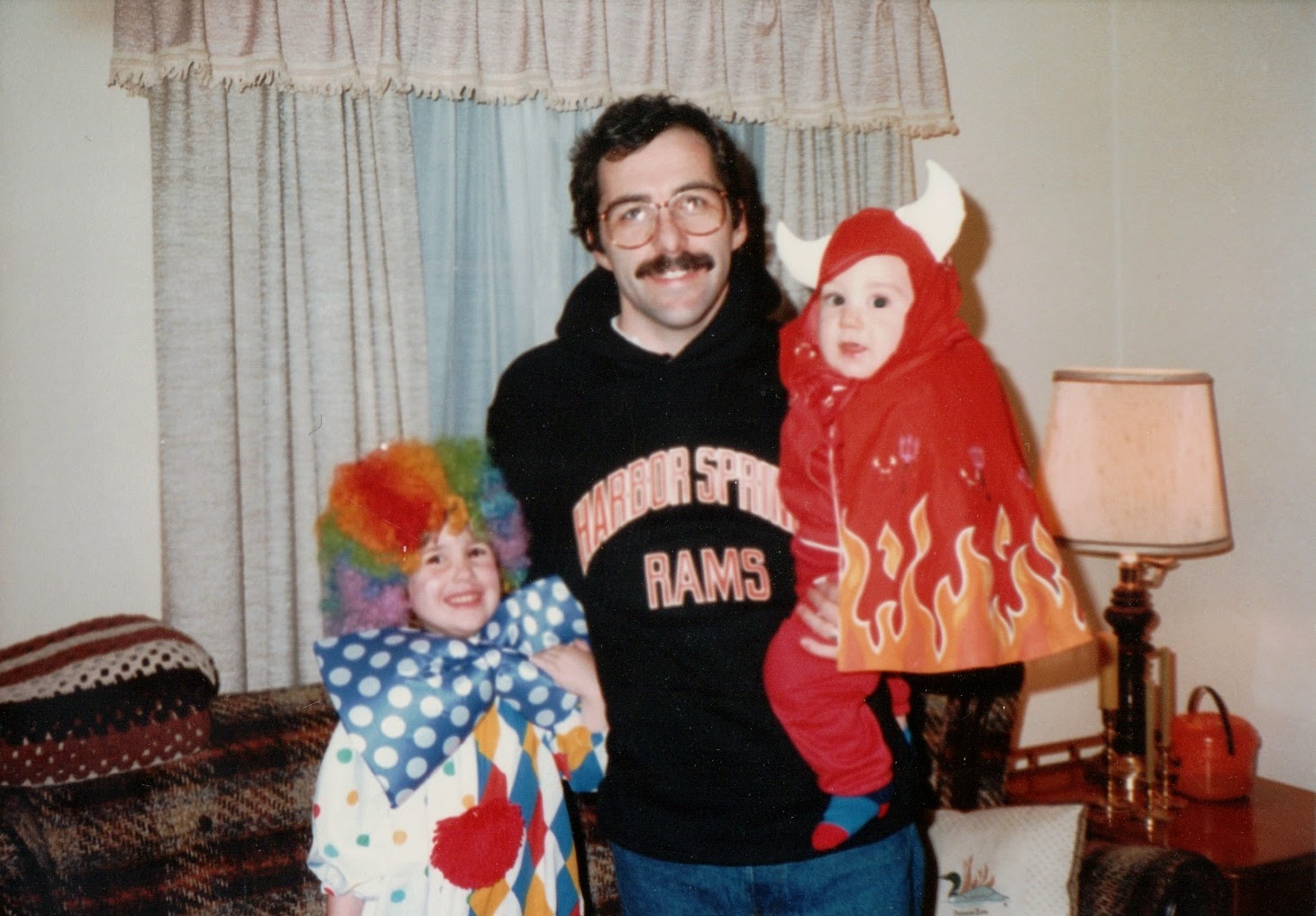 Travis' first Halloween, October 1987.
We went to Binder Park Zoo in Battle Creek for Halloween and didn't go door to door trick or treating, but we handed out candy. 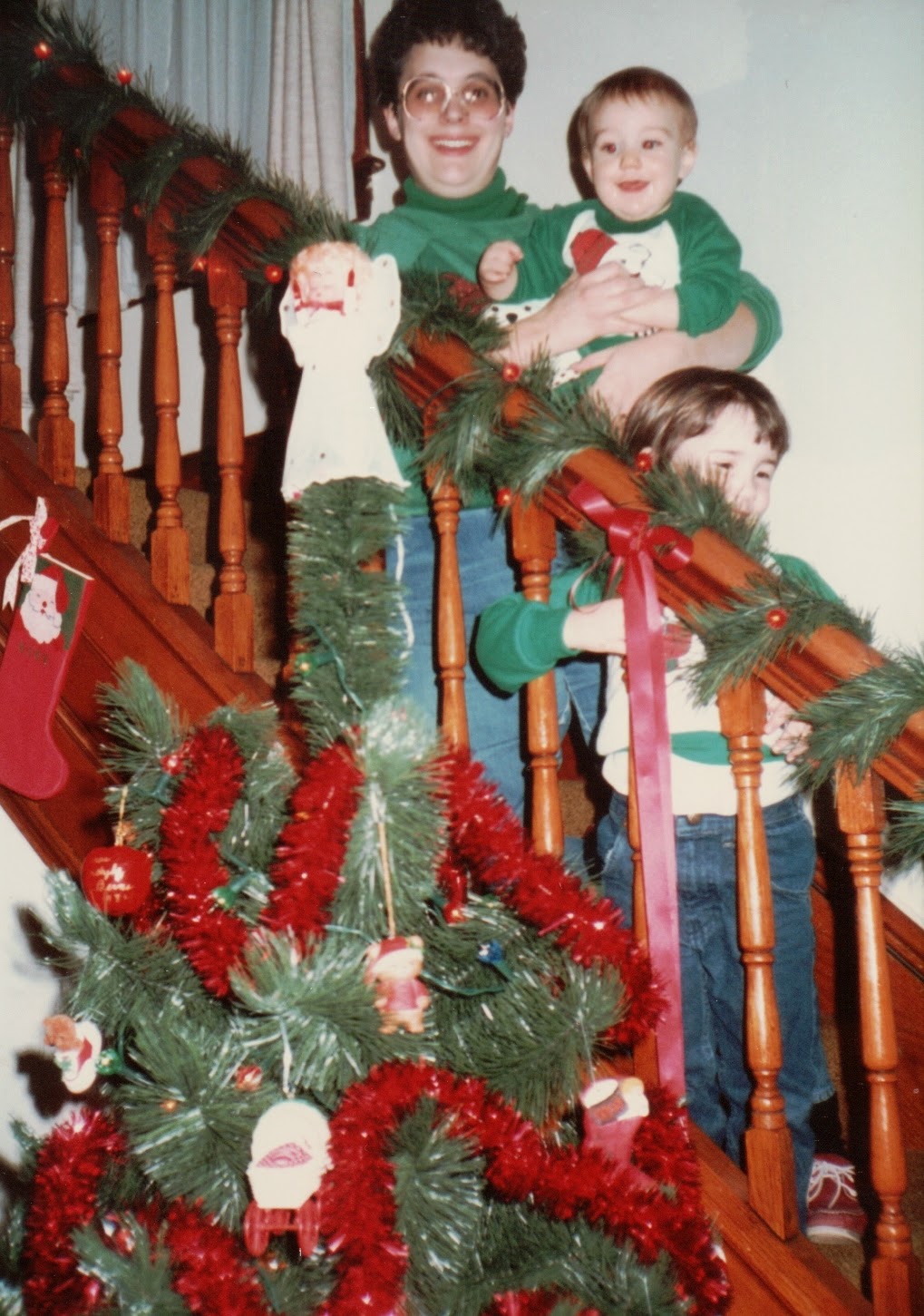 Travis' first Christmas, December 1987-the joy in his eyes when I carried him downstairs Christmas morning was priceless.  See the beautiful wood banister. 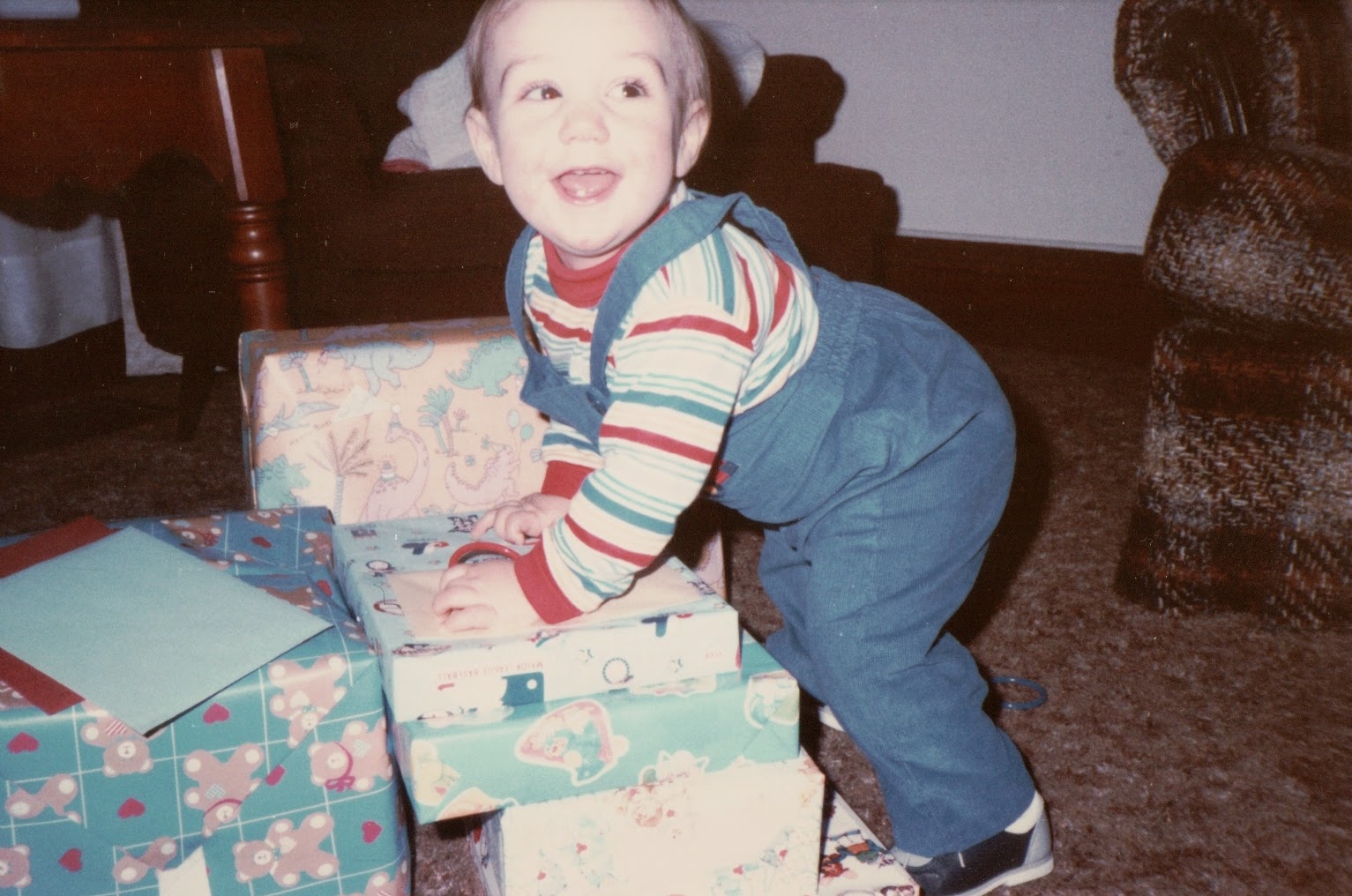 Travis celebrated his first birthday here in January 1988.  He celebrated many other firsts as well, including his first tooth and learning to walk.  He was such a happy baby. 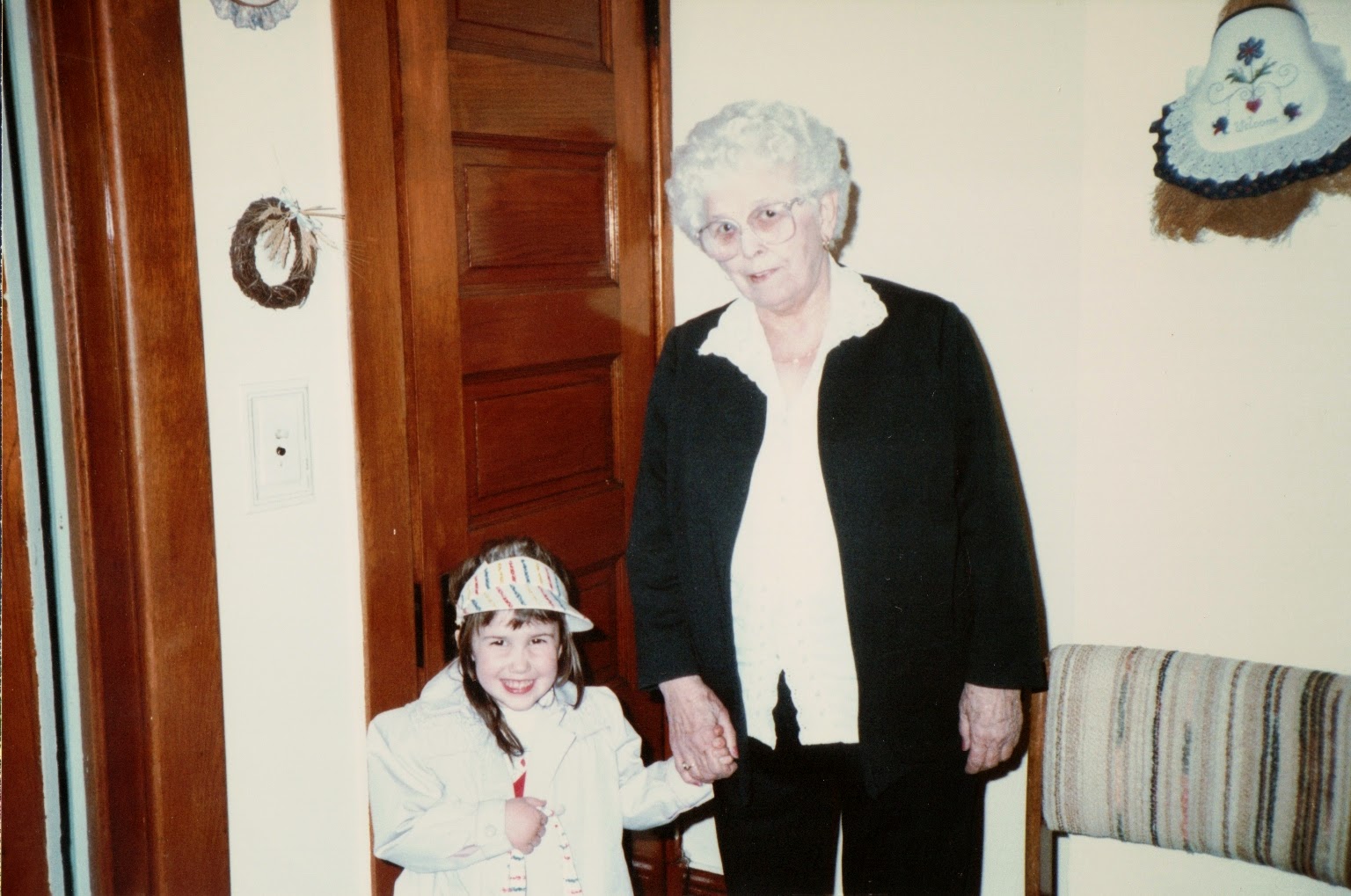 Kirsten with her Great Grandma Lee (Leona Dollaway Corcoran), who came for Grandparent's Day, May 1988, at preschool.  Kirsten's grandparents were living in Florida and Texas at the time. 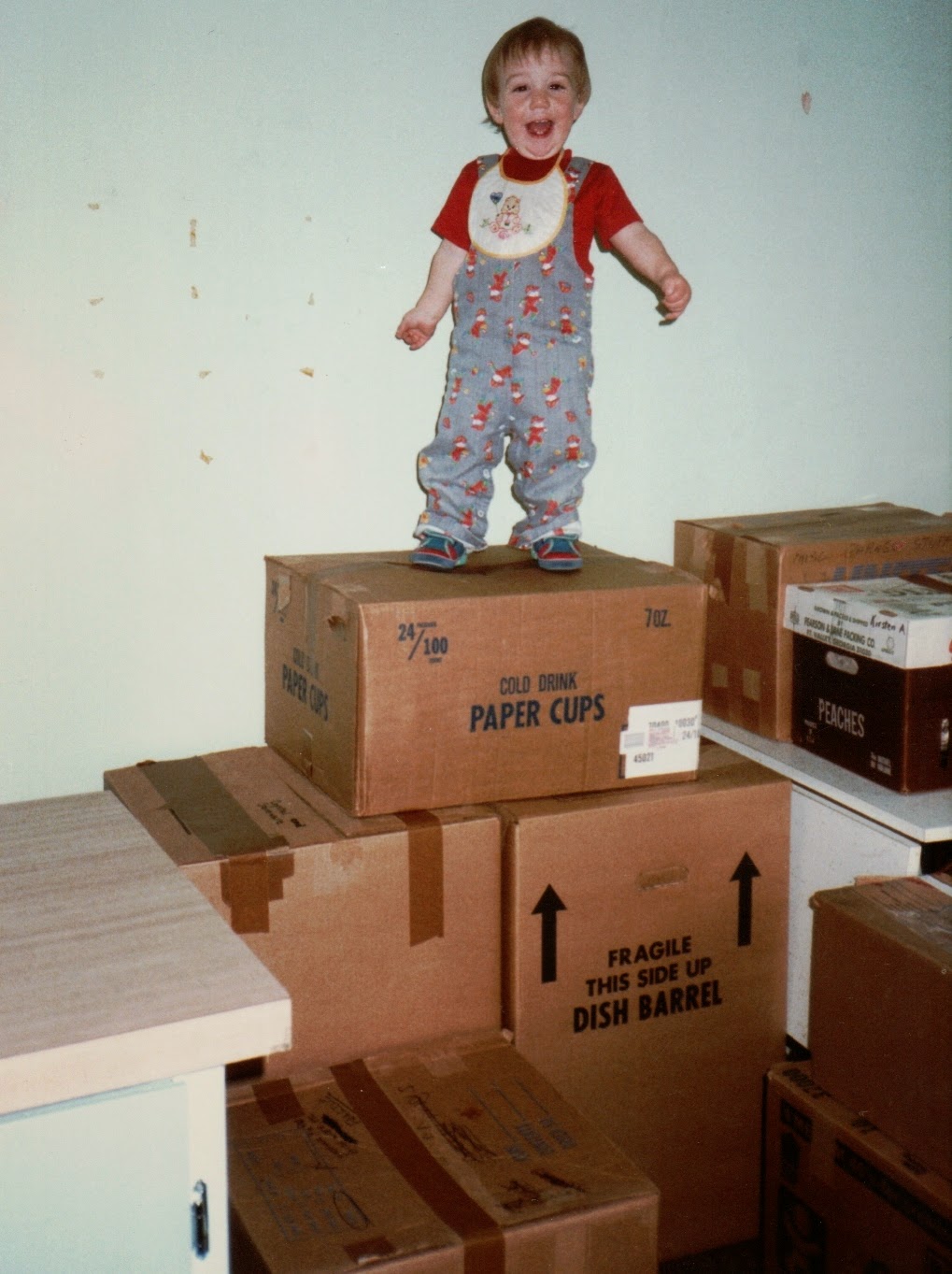 When getting ready to move, I walked into the spare bedroom and found this.  Travis was 16 months old at the time.  He was quite proud of himself. 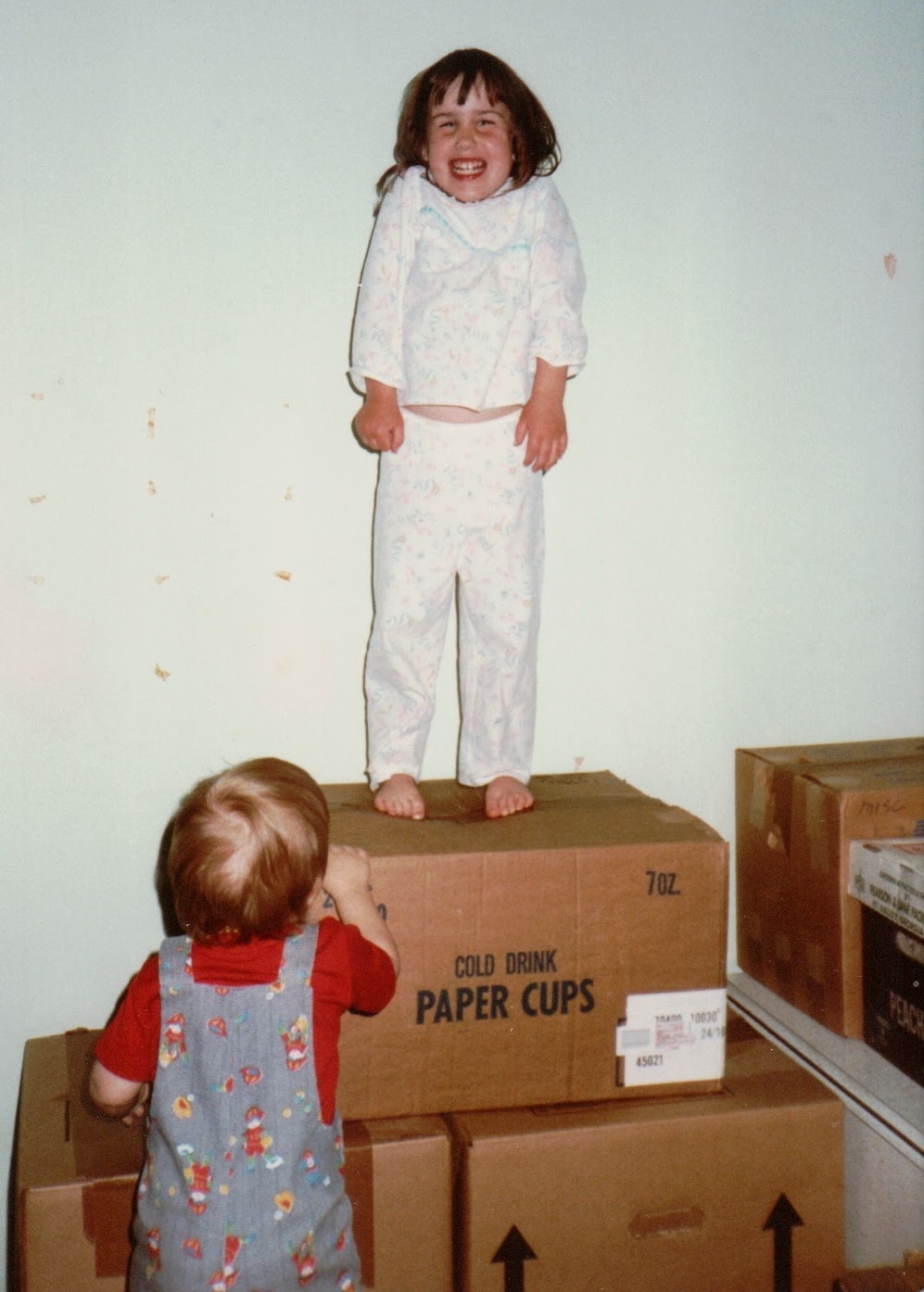 His sis, Kirsten, wasn't going to let him have all the fun.  She got into the climbing too in May of 1988.

Our decision to move was two-fold.  One, the house we were living in was being sold and two, we were of the opinion at the time that it was important to live in the school district and community that was providing us with a pay check.  We moved to Battle Creek on May 20, 1988.
Posted by Brenda Leyndyke at 7:41 AM

Email ThisBlogThis!Share to TwitterShare to FacebookShare to Pinterest
Labels: Kalamazoo, Those Places Thursday