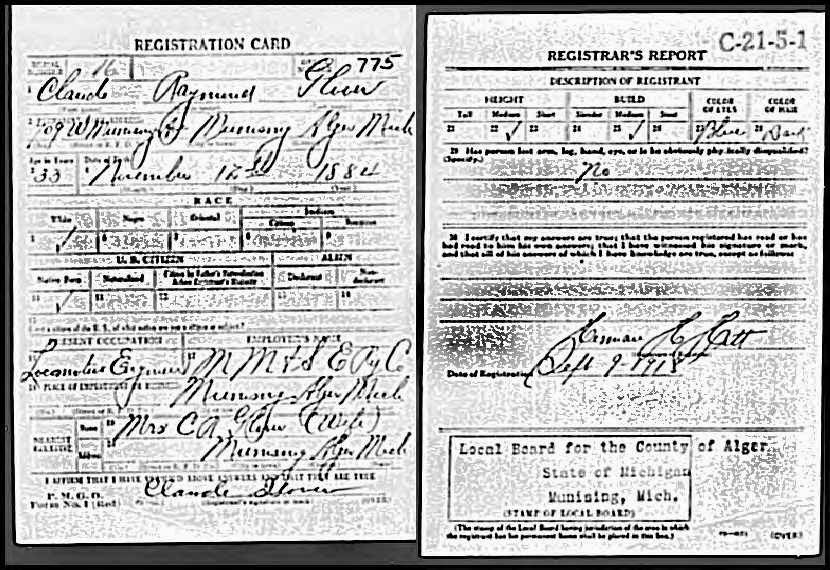 I don't know if it is the centennial anniversary of the start of World War I or something else, but my latest fascination with military records is the World War I draft registration records.  I thought I had found all of the men in my family tree who were of the age to register for the draft.  It wasn't until I ran a Roots Magic report, which I wrote about here, that I realized I was missing a few.

One the registrations I was missing was my great uncle, Claude R. Glover. Claude, was the son of Frank H. Glover and Hattie Fenn Glover, my great grandparents. I learned a few things from Claude's World War I draft registration record.

I learned that his middle name was Raymond.  I knew he had the middle initial of "R", but never knew what it stood for.  I had a description of what Claude looked like at the age of 33.  I learned that one of the railroad companies he worked for was M M & S E. Railway Company, Munising, Marquette and Southeastern Railway.  The MM&SE merged with the Lake Superior & Ishpeming (LS&I)  Railroad in 1923, five years after Claude's draft registration.

According to Claude's obituary, dated 9 April 1960 in the Marquette (MI) Mining Journal, he worked in the railroad industry for 52 years; 47 of those years as a locomotive engineer.  Claude retired in 1957 from LS&I Railroad.

Who would have thought that one little draft registration would reveal such great genealogical information?  It gave me new leads to follow.  I researched the railroad company he worked for and learned about the various railway merges and name changes that followed 1918, the year the above registration was recorded.  I was able to create four additional fact types in my genealogy software program from this one record:  Military, Residence, Occupation, and Description.

Posted by Brenda Leyndyke at 8:23 AM