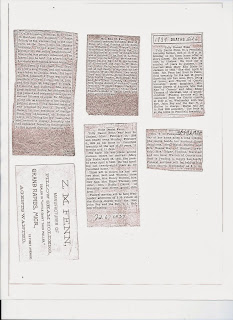 Page of obituaries from Huldah Rowley Fenn's Bible, click copy above to enlarge.

The second in a series of posts relating to the information in Huldah Rowley Fenn's Bible is for a page of obituaries that someone clipped and saved to the Bible.  Since Huldah died in 1862 she wasn't the one to paste them in the Bible, but someone who received the Bible after her did. The Bible was in the possession of Tully Daniel Fenn at one time.  All of the obituaries are related to the Fenn family. I have transcribed the ones in red below. They are:


The last item on the page was a business card for Z. M. Fenn, Zealton Myron Fenn, Huldah's grandson, the oldest son of Daniel C. Fenn and Elizabeth Poor.

Posted by Brenda Leyndyke at 7:31 AM