I don't think of myself as having a lot of research to do in my hometown of Battle Creek, Michigan, but a recent visit to the Helen Warner Branch of Willard Library proved me wrong.  I found quite a few newspaper articles on my Glover side of the family in the library's digitized newspapers.

Barbara Elaine Glover is my first cousin, once removed.  She is the daughter of Merle McKinley Glover and Genevieve Dout.  Although, Barbara was to be married in Virginia her engagement announcement was published in the Battle Creek Enquirer. Barbara's aunt, Adeline Glover Tyson McKie, and her grandmother, Hattie Fenn Glover, lived in Battle Creek. 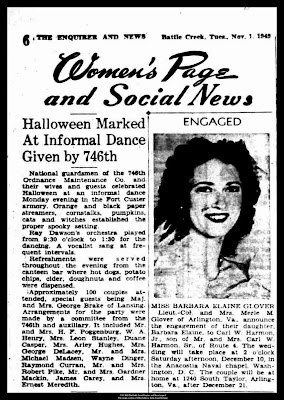