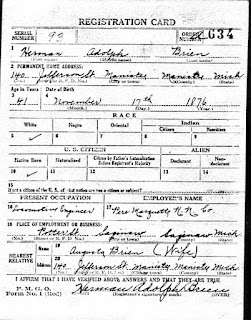 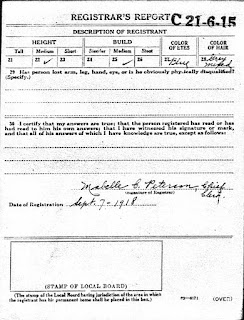 Do you ever write a blog post, proof read, edit, and publish it and then realize it wasn't very good? This was the case a week ago with this blog post.  I was getting questions that I thought could be answered by the blog post, but when I went back and read it I realized I didn't write all that I should have.  Here is the edited version that clarifies a few things, hopefully!

World War I draft registration cards can be bountiful in information for how little they are.  They provide clues to a family researcher that will help one find more information. Sometimes, the record creates conflicting information, as was the case with this record and his U. S. Citizen status.

The card above is for the husband of my maternal grandaunt, Augusta "Gustie" Fredrich.  Augusta was the daughter of Johann August Fredrich and Louise Fredrike Zastrow Fredrich.  She was the younger sister to my grandfather, Otto August Fredrich(k).  They were known to the family as Aunt Gustie and Uncle Herman.

This draft card is for Herman Adolph Brien (Breen). One of the things I noticed on this card is that Herman states he was native born.  Herman's marriage record and census records state that he was born in Germany.  I believe he was born in Germany and need to find proof of his birth.  The original post I wrote had people commenting that maybe he was trying to hide his German identity because of the anti-German sentiment of the time.  I imagine it was hard for German born American residents during the war.

I believe the other information on the card is accurate.  Most records I have found for Herman and Augusta have used the Breen spelling.  This one is the only one where I found Brien used.