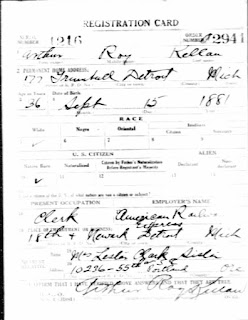 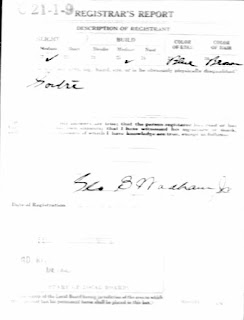 World War I draft registration cards are a wonderful family history resource because of the type of information that is recorded on them.  Researchers can find place of residence, birth date, occupation, a signature, physical description and more on these little cards.

The card above is for Arthur Roy Kellan, who married Jean Ethel Watt, my grand aunt.  He was know by my father as Uncle Art.  My father has many fond memories of his Uncle Art.  Uncle Art took my father to his first Detroit Tigers game.

Arthur Roy Kellan married Jean Ethel Watt on 12 October 1910, Jean died, in 1914, before this card was completed.  That is the reason that Kellan used his sister, Leslie Clark, as nearest relative. She was living in Portland, Oregon at the time.

Arthur Roy Kellan was born 15 September 1881.  He was 36 years old when he completed this card. He lived at 177 Trumbull in Detroit, Michigan, near Detroit Public Library. Today, it is an area with a lot of empty lots. 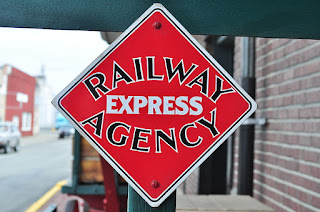 Arthur Kellan was medium height and medium build.  He had blue eyes and brown hair.  One distinguishing feature of him was that he had a goiter.

Draft registration cards provide a lot of information that is sought by family history researchers.

Posted by Brenda Leyndyke at 7:30 PM