My mom made the best German Potato Salad.  She got the recipe below from a friend when we lived in Harbor Beach, Michigan.  I hope you enjoy it as much as I do.

Cook 12 potatoes with jackets on.  When cool, peel and slice.

Chop 1 onion and fry with six slices of cut up bacon.

Cook until smooth.  Combine potatoes and gravy.  Heat only until potatoes are warm.  Sprinkle top with parsley and paprika. 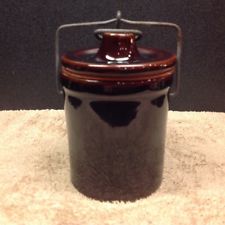 My memory of my mother's bacon grease container.

My thoughts:  Who remembers having a jar of bacon grease in the refrigerator?  I do.  My mother had one, it was a brown ceramic crock with a metal snap lid.  It was recycled and it originally came with cheese spread.  I had a bacon grease container when we were first married, but I kept mine in a jar.

I rarely cook bacon now, and do not keep the grease.  For this recipe you would use the grease from the fried bacon.  Oleo is oleo-margarine or margarine as we know it today. I think using bacon grease adds to the flavor of the dish.

You may think 2T. is a lot of salt and it is, but remember you have 12 potatoes and they need salt.

Posted by Brenda Leyndyke at 7:01 AM

Email ThisBlogThis!Share to TwitterShare to FacebookShare to Pinterest
Labels: Family Recipe Friday, Just Like Mom Use to Make